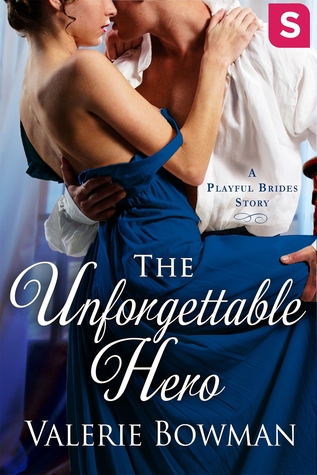 To escape a forced marriage to her loathsome, social-climbing cousin, Cecelia Harcourt banks on selling a romantic novel. But when she’s hit by a coach on the way home from meeting a potential publisher and loses her memory, the accident leads to an encounter with a fascinating man. . . who she’s convinced is the hero of her novel.

Due to his brother’s influence, Lieutenant Adam Hunt finds himself honorably discharged from the army. Adam intends to make his way in the world without the help of a war-hero duke, brother or no. He finds his plans for independence sidetracked by a chance encounter with a lady whose memory has gone. She believes he’s a hero. Can Adam become the man he was meant to be and fill that lofty role?

Read on for my thoughts on The Unforgettable Hero.  No true spoilers, promise.

Now I love a sweeping, detailed, grand Regency as much as the next Historical Romance lover.  Yet in a novella there isn’t the time and space for all that pageantry and splendor – there’s time for the story.  And The Unforgettable Hero is a charming, quick read that is totally fun.  Yes, fun!

Cecelia and her younger sister Mary were living in their own home with their aunt and uncle after their parents’ tragic deaths in a carriage accident.  Their uncle practically rubbed his hands with glee at taking possession of the home and quickly eyed Cece’s small dowry as a prize to be delivered into his hands by forcing Cece into a marriage with his odious son Percy.  But Cece has a plan to help escape from both the marriage and the relatives’ control.

You see, Cece is a writer of romantic novels.  She is convinced if she can only sell her novel that she will have the funds to set up a small household for herself and her sister, as well as getting the medicine Mary so badly needs.  Unfortunately, life often does not work out as we planned.  Cece was struck by a carriage after leaving the meeting with the publisher.  She is knocked unconscious and is rescued from further danger by Adam Hunt.  And here’s where things get interesting.  When Cece awakens she is, well, not quite herself as she believes she is the heroine in her story and the handsome man who rescued her is her betrothed.  Yes, awkward.

Adam is the youngest son, and as such the military would be his livelihood.  His eldest brother has settled some money on him, but Adam wants to make his own way in the world.  On this day, he happened to see Cece be hit and ran to assist the lovely young woman.  He brought her to his brother’s residence and called in the doctor to tend to her.  Imagine his surprise when the young lady awakened claiming to be a titled Lady who he knew did not exist and betrothed to himself – as a titled man with certainly not his own name!  The doctor believes she has suffered an injury to her memory and that they should play along with her beliefs until she actually came to her senses.

Enjoy this fun romp as Cece and Adam work their way through this mystery and discover exactly who this woman truly is.  Of course they will come to their happy ending eventually – but the journey to get there is charming and simply a fun time.

I had such a good time reading The Unforgettable Hero, and I believe you would too.  There’s no need to always take our reading so seriously – have some fun and enjoy a young lady’s pretend life become reality, for a while at least – and enjoy her own happy ever after ending.

*I received an e-ARC of The Unforgettable Hero from the publisher, St. Martin’s Press and NetGalley in exchange for an honest review. That does not change what I think of this novel.*