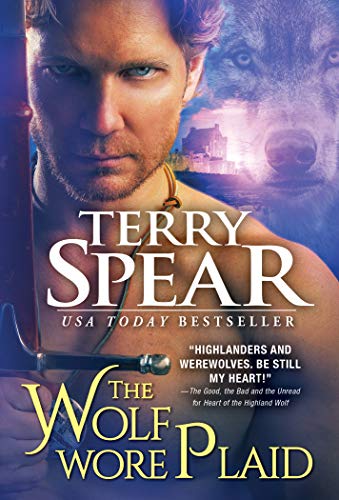 The Wolf Wore Plaid takes us back to the Highland Wolf series and to familiar faces, couples we’ve met before, and an enemy both Heather and Enrick will need to deal with.  While you could read this on on its own and be entertained while enjoying yourself there are characters making appearances from earlier books in the series (which makes this a perfect catch up with old friends kind of story).  I will always suggest reading a series from the beginning, but if you can’t do that then you’ll not be lost and will enjoy this romance full of shifters, danger, and some very stubborn soon-to-be mates.

A movie being filmed at the castle opens up an opportunity for an enemy clan/pack to cause some serious trouble for Enrick’s clan/pack.  And these bad guys won’t hesitate to use anything or anyone to win their battles.  Enrick has always felt something for Heather but he wasn’t fast enough to work on those feelings before she was to be mated to another man.  His death a few years ago is still haunting (and endangering) Heather to this day.  Now with the pack on high alert for danger during this filming, and everything connected to that project not going exactly as expected Enrick and Heather will find themselves drawn not only to each other as mates, but into further danger as the enemy gets bolder.

I loved Heather’s pie/bakeshop where the staff dresses in period costumes… or in their own older clothing as some of these shifters have been around for a very, very long time.  It’s that kind of tongue-in-cheek, smiling with a knowing the truth kind of smirk that gave me more than a few chuckles during The Wolf Wore Plaid.  We also get the chance to catch up a bit with some of the characters from the earlier stories.  I had fun back in this world, and if you love a good Shifter/Paranormal Romance with a dash of danger, lots of sizzle, and don’t forget the Highlanders… then you’d have a blast here.

2 responses to “The Wolf Wore Plaid by Terry Spear”