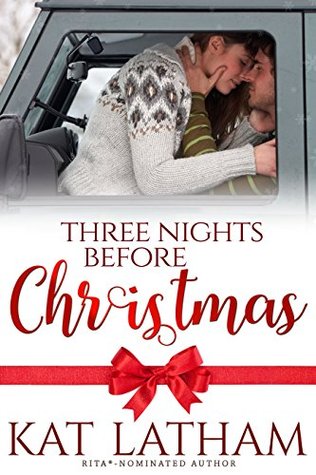 After three years in prison, freight train engineer Lacey Gallagher doesn’t expect this Christmas to be very merry and bright. At least chopping down trees for her brother’s Christmas tree farm will help her save money to get her life back on track. All her plans derail, though, when her new job puts her in territory patrolled by the man who haunts her dreams—the forest ranger who sent her to prison.

Austin Wilder isn’t thrilled about Lacey working in his forest—but he soon realizes he needs her help. His family is depending on him to restore an old steam train for a spectacular Christmas event, and train expert Lacey is his only hope of finishing in time.

Working together challenges every assumption Lacey and Austin have about each other, and they discover a desire hot enough to melt even the deepest Montana snow. But will the season of second chances be enough to mend the most hardened broken heart?

Read on for my thoughts on Three Nights Before Christmas.  No true spoilers, promise.

How could loving someone, trusting someone turn a person’s life so horribly wrong?  At this point, Lacey didn’t have any better answer than she’d had three years ago when she’d heard the doors of her prison cell close behind her.  She’d ended up here by trusting and loving a man who’d used her, lied about her under oath.  Yeah, guess that did mean she was criminally stupid just like the arresting officer had said.  Only he believed she was as guilty as sin and never once wavered from that opinion.

Now she was free again – well, as free as an innocent woman on several years of parole could be.  As free to walk down the streets of her home town and have people gawk and point at her.  As free to never go back to the job that she’d loved. to driving the trains that sped through the mountain passes and forests around Marietta, Montana.  Yeah, all that – but if she kept low and invisible she might survive but at least she was outside of those prison walls… and she was never going back, because she’d never give her trust like that ever again.

Austin was surprised to see Lacey at her brother’s Christmas tree farm.  Oh, he knew that she’d been granted parole, he was the arresting officer but he just figured she’d hide herself away from the townsfolk and not be out here in the middle of the chaos of Christmas tree sales.  Still, he’d keep an eye on her.  Too bad that he’d eventually have to break down and ask her for help restoring the old steam engine that could take paying customers up to Santa’s Wonderland at the top of Copper Mountain.  It was a fundraiser to open a camp for kids like his nephew Josh who’d been injured in this very forest.  Yeah, he’d have to beg he supposed but that didn’t mean he had to do it nicely.

Three Nights Before Christmas is a powerful, emotional romance that as a side effect should make you bless your lucky stars every single day that you were never in Lacey’s position.  Austin comes off as a very stern, very rigid man who believes in the evidence that was in front of him at the time of Lacey’s arrest.  But she’d done her time and the parole board felt it was enough to send her out into the world again.  He still felt she was a mastermind at lying and deceiving others, either that or she was truly criminally stupid to get caught up in the mess she was in.  Lacey was an emotional volcano just waiting for the right moment to erupt.  The only thing she’d done wrong was trust and love the wrong man.  Now her life was in ruins, she might be physically free but at times she felt like those prison walls were still closing in on her.

There were times when I was reading Lacey’s thoughts that I kept thinking of a wounded animal’s cries.  That desperation that some part of the brain knows to reach out for human help but at the same time understands the danger in that trust.  At times Lacey’s emotions and dialog were so raw you could almost physically feel her emotional pain.  Slowly as Austin and Lacey work to restore the old steam engine a different side of Lacey begins to emerge and just maybe Austin begins to have some serious doubts about what he thought he knew about her.  Their romance is steamy, intense.  At time the emotions could go to the highest peaks then crash down to the deepest valleys.  It was a heart wrenching journey.

I would highly recommend Three Nights Before Christmas.  It’s not your typical cozy Christmas tale.  There are some very real issues and emotions being dealt with here.  But it is an excellent story that will rip your heart out and mend it again.

*I received an e-ARC of Three Nights Before Christmas from the publisher and NetGalley in exchange for an honest review. That does not change what I think of this novel.*

One response to “Three Nights Before Christmas by Kat Latham”