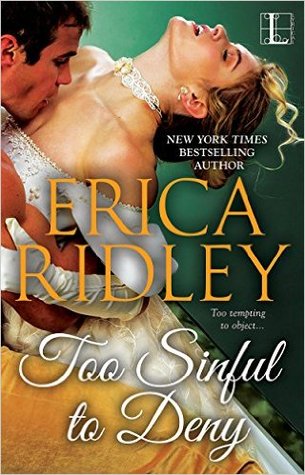 Too Sinful To Deny is a delightfully intriguing Gothic-like Historical Romance.  To be completely fair to all readers, this title was originally published in 2011 so it is possible that you have read an earlier edition of this story.

Susan has been banished to the countryside after an incident in London.  A pampered, slightly spoiled young lady, Susan is accustomed to using her family name to make what she wants happen – unfortunately for her, the family name means nothing here and she must make her own way at Moonseed Manor.  Or rather, try to escape from it and the secrets it holds.

Ever since an unfortunate, almost deadly accident in London, Susan has acquired an unusual gift… she does indeed see (or at least sense) dead people.  And the absolutely last place she wants to be confined to is this manor.  Evan is in search of a dead person, his brother.  While his role here at Moonseed Manor is quite different from his London routine, Evan is determined to unlock secrets… and perhaps seduce a lovely, spoiled brat as well.

Too Sinful To Deny has some Gothic elements, ghosts and things that hide in the night, touches of Romantic Suspense all in an Historical Romance setting.  So you do have a few reasons to enjoy this story, no matter your preferred genre.

I enjoyed this story very much.  It’s whimsy and touches of Gothic gave me a definite chill at times.  The secondary cast of characters is both delightful and just a bit spooky – all falling easily into the natural way of things in this world.  But it was the romance of Susan and Evan that delighted me, and kept my attention the most.  Two people who logically should be far from what the other wanted in a partner,, love doesn’t work on logic – thankfully.  And honestly, it was simply fun to go back to my reading roots which included lots and lots of Gothic romances.  Ms Ridley did this one well, convincingly and with a cast that Mary Stewart would have been proud of.  Take a chance on a story that touches on several genre, I believe you’ll find yourself charmed.

2 responses to “Too Sinful to Deny by Erica Ridley”