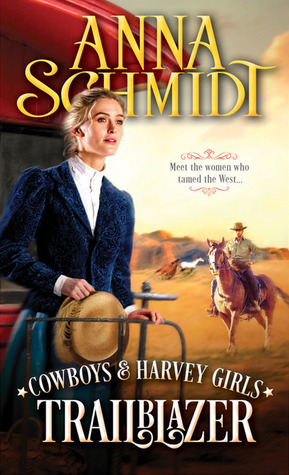 “Trailblazer” begins Anna Schmidt’s new series, Cowboys & Harvey Girls with a delightful look into not only the Harvey Girls concept but of their life trying to maintain that concept when love comes along to change everything.

Grace’s family is in dire straits and she’s made the decision to apply to become a Harvey Girl with the hopes that she can send money home to help out her family.  And if she gets a bit of independence away from her family, all the better.  Excited to begin her new job Grace has no idea that her future awaits her on the train… or the complications that will arise from loving this honorable man.

Nick has a good life, but his dreams are of an extension of that life to include land of his own, a wife, maybe some children and a ranch of his own.  He’s not afraid of hard work to get to that dream, and it helps that his job as ranch foreman is with a family he respects as they practically raised him during his formative years.  He had no idea that his future would meet him on the train, or that loving this lovely woman would bring him such joy… or that they both would face such dangers in order to keep Grace safe.

Grace and Nick are such a unique couple.  I fell in love with one handsome man with a heart as wide as the range and would have loved to call one special lady a friend.  They are realistic in their reactions and following their romance was an adventure.  I had heard of the Harvey Girls before but didn’t know many details about them.  “Trailblazer” filled in those details and set up the premise for some intriguing stories to come in this series.

I had fun with this story.  A loving couple, one nasty villain, new adventures, danger to be faced and true love to be found.  What’s not to enjoy about all that?  If you love Western Historical Romance then you’ll want to get started on this new series.  I would not hesitate to recommend it, you’ll find interesting characters, intriguing situations, and an enjoyable story.