Twice As Wicked by Elizabeth Bright 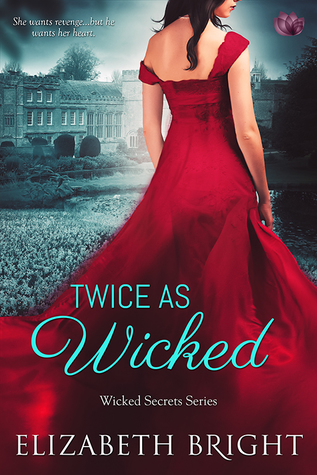 Miss Alice Bursnell is determined to wreak revenge on Nathaniel Eastwood, Viscount Abingdon, for the seduction, ruin, and death of her beloved twin sister. But how to expose a seducer without falling prey herself? As she gets closer to Nathaniel, she finds she is in serious danger of following in her sister’s much-too-tempted footsteps. The man is nothing like the heartless rake she expected…and his kisses are truly divine. Could she be wrong about him?

When a mysterious and gorgeous woman confronts Nathaniel at a fancy ball, he suspects she has murder on her mind—his own. But the more he tries to determine who the deceptively innocent beauty is—and what she’s up to—the deeper he falls under her alluring spell. Nathaniel fears he’s in imminent danger of losing his life…or worse, his heart.

Titles in the Wicked Secrets series include:  Twice As Wicked –

To be frank, it’s hard to believe this story is Elizabeth Bright’s debut novel.  She writes with passion, humor, a keen sense of wicked irony and an understanding of the time period that I didn’t have to correct in my mind.  While I fully intend to follow this series, it seems I may have a new Historical Romance author to follow along on their journey.  I love when I make that kind of discovery.

Alice is plotting revenge on the man who ruined her twin sister, and nothing will stop her from making him pay.  Her sister died in childbirth, as did the baby as well.  She’d been tossed out by her family, left alone to deal with her pregnancy and the difficult birth.  Alice cannot allow the pain she’s feeling at her twin’s death go.  Someone has to pay.  And she will get revenge on one heartless cad.

Except… things aren’t what they seem.  The man Alice tracked down from the picture in a locket isn’t acting like a man who would do what she knows he has done.  Nathaniel is quiet, almost shy and unassuming.  She is finding herself attracted to the man he is showing himself to be… but how is that possible.  She cannot fall for lies… but what if there is truth she simply doesn’t know yet.

On the surface Twice As Wicked is a dark, revenge filled story… but that is not the entire story.  There is banter, humor and irony abound.  There are secrets, danger and mystery as well.  Nathaniel and Alice make a charming couple, especially once we realize that both are just as inexperienced as they claim.  Watching Alice fall for a man who she expected to hate is a delightful experience.  And I have to admit that Nathaniel’s charm won me over very quickly.  Through twists and turns, secrets revealed and information discovered we find a quite different situation than we first believed.  Soon Alice and Nathaniel are fighting side by side against danger, and working to solve a mystery.  And maybe finding a love to last a lifetime.

The secondary characters help to bring this story alive.  I’m definitely looking forward to learning more about Wessex and Eliza.  There are also hints that even more is not as it seems… but they are hints, vague “perhaps” things that we’ll simply have to wait to see how they fall out… but it is an intriguing possibility.

I enjoyed my time in this world with interesting characters and intriguing plots.  I’m definitely hooked for the entire series now, and I’m looking forward to what we discover next.  I’d recommend this story to any Historical Romance reader who enjoys twists and turns, danger and mysteries, and secrets to unravel.

Catching the Player by Diane Alberts

Catching the Player by Diane Alberts