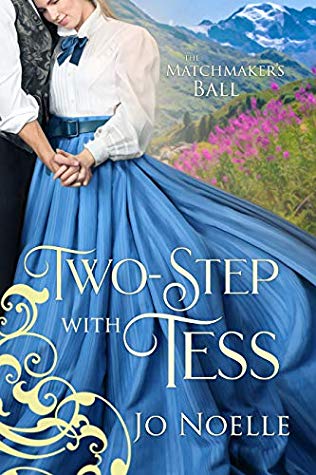 While the Cowboys & Angels series has officially come to an end we can still visit Creede, Colorado through the spin-off The Matchmaker’s Ball series, and we begin with Tess and Claude, two unlikely people who are thrown together in unusual circumstances – even though they’ve known of each other long before they set foot in Creede, Colorado.

The basics you’ll need to pick up Two-Step with Tess can be found in the cover description.  What you won’t find there is the emotional attachment you’ll form with this couple early on.  Watching Claude change and grow from the man he was when he stepped off that train to the man he’ll become was a touching, emotional journey.  And I’ll admit, at the mention of one particular character’s name I cringed and waited for the chaos to begin.  Some people just never change.  Tess is a strong young woman, far stronger than even she realizes with a determination to make her own path to the future on her own terms.  I enjoyed watching this couple fall in love – and finally getting satisfaction for Tess and her sisters over how they left Pittsburgh to journey to a new life in Creede.

I will also admit that I do miss the touch of angels, for that is a very ingrained aspect of Creede for me at this time after spending so many enjoyable hours in this fictional town.  But the kindness of strangers (and new acquaintances) is very strong in this opening story of the spin-off series, and I’ll be following along on this journey as old friends often make appearances.  I had fun, and that’s the whole point.  So, if you have enjoyed the Cowboys and Angels series be sure to check out The Matchmaker’s Ball series, I suspect you’ll have a fantastic time.