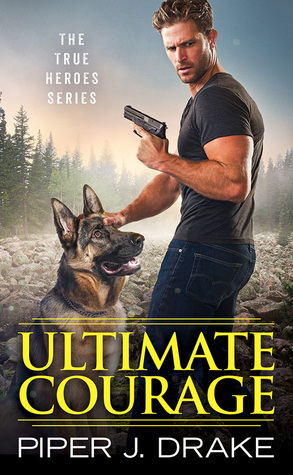 Ultimate Courage is full of action, suspense and a really great couple who have their issues but work through them in a realist manner.  We also get another amazing dog characters from the Hope’s Crossing Kennels – and Souze is well, simply amazing.

Alex has been in many battles but perhaps some of the most difficult have been here at home,not in a war zone.  The fight to be allowed to raise his young daughter is one.  And the constant battle against his PTSD is another, a daily fight that at times seems to get the best of him.

Elisa is running from her ex.  A man who has used emotional and mental abuse to control her.  He’s never giving up the chase and she is constantly looking over her shoulder in fear.  Elisa brings out the protective male in Alex, and he’ll do just about anything to keep her safe.  And that is Elisa’s fear that in keeping her safe he will put himself and others directly in harm’s path.

This couple captured my attention and my heart right from the start.  And Souze – well, he might be at Hope’s Crossing for rehab but he is more than helping Alex along the way.

With a manipulative, evil villain at the core of the action, Ultimate Courage delivers a suspenseful romance along with a fully packed action story.  I have enjoyed both novels in the True Heroes series (trilogy) and now I’m definitely looking forward to the next story.

If you’re a sucker for big, soulful puppy dog eyes, a solid story and a romance that hits all the right notes – then have I got a story for you.  Highly recommend this story and series to any Romantic Suspense reader or anyone who enjoys a good solid romance.

*I received an e-ARC of Ultimate Courage from the publisher, Grand Central Publishing – Forever and NetGalley in exchange for an honest review. That does not change what I think of this novel.*