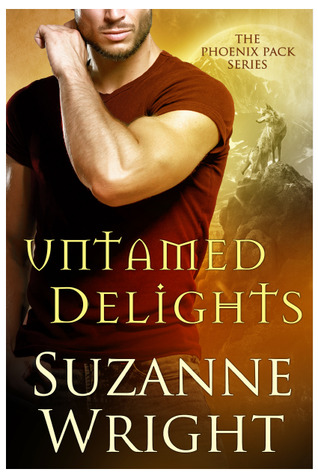 If you’ve followed The Phoenix Pack then you’ve run into Dominic throughout the series.  Sex on two legs (or four paws), Dominic has been in the background with his corny one-liners, his devotion to the pack, and his (until now) untold complete story.  If this is your first time here then I’d gently suggest you start at the beginning – there is so much to experience within this unique group of shifters that to not enjoy them all would be a shame, in my opinion.

It’s always a bittersweet moment for me when I’ve finished the final story in a series.  That was certainly true with Untamed Delights.  Yet, what an amazing ride it’s been.

The chemistry between Dominic and Mila leaps off of the page, but so does the sadness as well.  They are chosen mates, not fated ones, for Mila’s true mate has picked someone else to imprint on, leaving her alone and not caring that her father is sending her off to a loveless, arranged marriage.  Yet that changes when she meets Dominic.  He might not be fated for her, but he is her chosen and perhaps that’s even better for them both.

There is such depth to Dominic, certainly more than we saw previously, but even more than expected.  I loved watching them discover each other, beyond the sensuous side of them, to the people they truly are and can be together.  Oh, do not doubt that these two can burn up the sheets, they are as sexy as you’ll ever find.  Yet, knowing Dominic’s background seeing him with a woman that he cares for so much, one he has chosen for his forever was a moment I’d waited for this man for a very long time.  It’s not going to be an easy pairing, there is a real danger to be faced from several fronts yet they fight for what is real for them – and that’s all that truly matters in the end.

I have loved The Phoenix Pack from the very beginning, and I don’t really want to see this series end, although I know all things must eventually.  The Mercury Pack is still going strong, and there is more on the horizon.  So perhaps these characters I’ve loved for years won’t totally be gone, only seen now and then – and that would be enough for me as I wish them a happy future and send them off into the sunset.