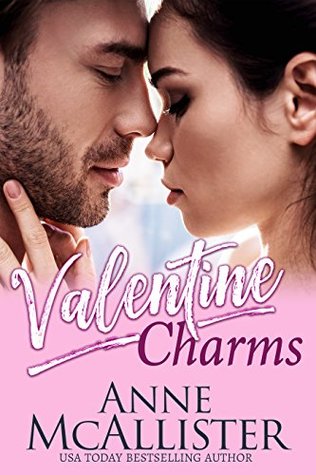 Twenty-three second graders were on a mission!

Her students were convinced Jane Kitto needed a man in her life. A ‘real man’ – not the Secret Admirer who had, every Valentine’s Day for years, sent her a tiny charm. Jane appreciated their enthusiasm, but not their choice. Football star Zack Stoner was the last man on earth she’d fall for. Handsome as sin, tough as nails, and more appealing than she wanted to admit, Zack made Jane want things she never imagined wanting–with him.

Zack Stoner had never forgotten Jane. When they were younger, he’d been confused, unnerved and fascinated by the sweet and generous Jane. It wasn’t all that different now, except he was a man, and knew he wanted her. But would Jane take a chance with someone like him?

Valentine Charms isn’t a long story, yet it is packed with emotions and and a couple that you cannot help but fall a bit in love with yourself.

Jane and Zack both attended the same school as young kids.  The difference between them was simple – Zack was considered the “bad boy” and from acting out and his home situation probably deserved that reputation.  Jane was the quieter one, the girl who looked up to Zach but wouldn’t act on that feeling in a very young girl.  One act of kindness will change the path in life for both of these young people.  And eventually what goes around usually comes around again.

Jane and Zach were two very enjoyable characters.  It’s not difficult to see the plot of their romance, but it certainly is enjoyable watching them fall in love with the real people – not someone they created from memories.  This story hit all the feel good buttons for me, along with a few chuckles and the antics of a classroom of mini-cupids.  Read this one for pure fun and smiles.  I enjoyed myself and I’m certain you would as well.

Valentine’s at the Graff by Sinclair Jayne

One More Round by Shelli Stevens

Valentine’s at the Graff by Sinclair Jayne

One More Round by Shelli Stevens