This week I’m waiting for the next installment of an unusual mystery series.  The Pru Marlowe Pet Noir series follows the life, times and animals in need of a particular human’s intervention.  Think of The Ghostwhisper tv series – now consider that you are able to “talk” to animals, interact on an intelligent, conversational level … then you have an idea of what the Pru Marlowe murder mysteries novels are about.  Murder is never a snap to solve but when you have the purr-fect eye witness playing beside the dead body why not use what you’ve got?  If you can psychically talk to the animals – why not ask what they know?

I have admitted before that I’m a sucker for covers – and that cover looks exactly like my Leia (see her picture below) when she was an itty-bitty kitten.  Now she’s a 30 pound huge ball of fluff, but the blue eyes – yeah, a cover to touch my heart.  🙂 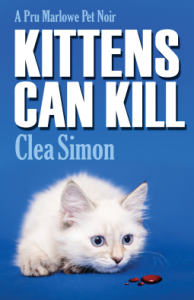 The dead don’t keep pets. So when animal behaviorist expert Pru Marlowe gets a call about a kitten, she doesn’t expect to find the cuddly creature playing beside the cooling body of prominent Beauville lawyer David Canaday. Heart attack? His three adult daughters angrily blame drug interactions, feline allergies—and each other. And begin to feud over their father, his considerable estate, and that cute ball of fluff. While the cause of death is pending, each sister has an axe to grind –with arguments that escalate when David’s partner reads out the will.

Pru’s special sensory talents and sensitivity to animals that caused her to flee the cacophony of Manhattan for the quiet Berkshires add further problems. The local vet is overwhelmed with money running out. There’s that needy Sheltie and some invasive squirrels? But the dead man’s kitten, his former partner, and his troublesome family keep drawing “wild-girl” animal psychic Pru back in. Despite the wry observations of her trusty tabby Wallis, now the wrongfully accused kitten’s guardian, and the grudging compliance of her cop lover, this may be one time when Pru can’t solve the mystery or save the kitten she wants to believe is innocent. A single witness knows the truth about that bright spring morning. How far can Pru investigate without risking her own hidden tale?

This is one of my cats – a Ragdoll called Leia.  We often call her a “puppy-cat” because she loves to roll over and get her belly scratched.  Now Leia and I have conversations – she meows and I answer.  I have No Clue what she is saying but she is enthusiastic about whatever her point is.  I certainly wish I could talk to the animals too.   Or maybe I don’t really want to know….  *snicker* 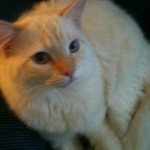 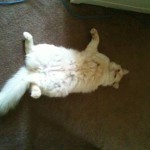 50 responses to “Waiting on Wednesday #5”