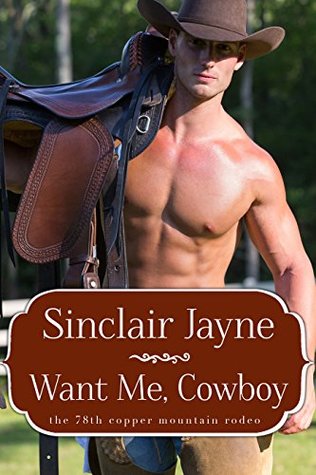 Cowboy Luke Wilder only wanted a beer at Grey’s Saloon. Instead he ends up in a fight with a brother he never knew and dumped by a fiery red headed bull breeder he only asked to dance. So much for keeping a low profile. But Luke Wilder is stubborn, and no woman’s ever said no to him twice, in business or pleasure.

Tanner McTavish is more focused on breeding champion bucking bulls than in making out with cowboys, unless that cowboy’s Luke Wilder. She’s had a crush on him for years, and the Copper Mountain Rodeo could be her chance for a little romance except she needs Luke on her side for a new business opportunity. Flirting and kissing are off limits. Too bad Tanner’s never played by the rules…

Luke has avoided Marietta, Montana for very good reasons.  Yet as the temporary rep for IBR, the system that picks the bulls that are good enough for the highest tier in rodeo, he’s got business here.  And he’s entered the Copper Mountain Rodeo, even though it’s not his usual circuit.  He’s been in town a very short time before he’s propositioned by a beautiful woman, decked by a man who could be his twin in looks and banned from the best saloon in town… and he hasn’t even left town to start checking out bull breading ranches.  It’s going to be a weird rodeo.

Tanner has left school to return to Marietta and the family ranch when her father suffers a debilitating accident.  She’s taken over their bull breeding program with amazing results proving her natural talent from her school days was well deserved.  At one time Tanner was a promising barrel rider when a fall changed that choice.  Now she breeds bulls and broncs, boards horses and takes part in other areas of the rodeo that she so loves.

When Luke shows up at the Triple T Ranch to check out the bulls and the operation, Tanner does something out of the ordinary for her, something that her twin, Tucker might more naturally do… she grabs the moment with the man she’s been attracted to for years, even though he’s unaware of her, and gets some serious flirt on.  The results will lift her up to heights she didn’t know existed – and crash every dream she’s ever had.

Want Me, Cowboy starts off with a wallop and doesn’t let up until the final page… and even then you’ll imagine that there’s still stuff going on.  Luke and Tanner have a sizzling chemistry from the very start.  In between family drama, parents who invade personal space too much or ignore the good their child is doing, and the craziness of rodeo weekend Tanner and Luke have made a strong connection.  Brothers who don’t know when to step away, unexpected news and a sister who has wounded her twin in ways that are hard to heal – all add to the emotional impact on two people who are falling in love, even if they don’t acknowledge that emotion just yet.  When the ultimate smack down does come it could not only damage emotions but could injure bodies as well.

I greatly enjoyed Tanner and Luke’s romance.  It’s one example of why I love Tule writers so much – they deliver a great story with believable characters and keep the continuity with a small town going strong.  This is a story I’ll be reading again so I would definitely recommend this for any Romance reader who loves to fall in love with characters.