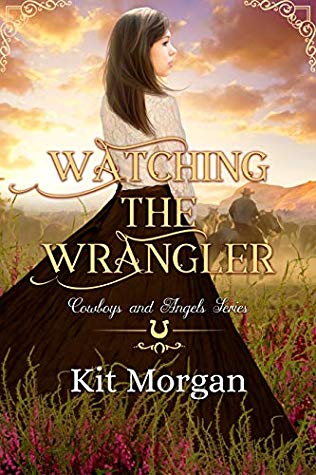 And one fussy angel …

Callan Jones came to work for the Whites with no expectations, a little money in his pocket and a good work ethic. It was all he needed. After losing his family back in Texas, this was his chance to make a fresh start. Then he showed up. Some dandy claiming to be his guardian angel!

Arabella Simpson’s family moved from place to place as they meandered west. Now they were in Creede and it was no different than other place they’d stayed and high-tailed it out of. But, she had to admit, the scenery was beautiful and in more ways than one. If Arabella didn’t stop watching the wrangler at the neighboring ranch, they might have to vamoose for a reason other than her father’s gambling habit.

Can two people determined not to fall in love find it? Maybe with a little help from a certain guardian angel they can.

WATCHING THE WRANGLER is another charming, engaging story in a series that I’ve loved from the start.  This time around we finally see Cal, the ranch foreman for the Whites get his own personal happy ever after – and some help from one dandified angel.

Arabella has had a rough life due mainly to a no-good father who loves whiskey more than anything aside from a get rich quick at someone else’s expense scheme.  Her family moves from town to town, often quickly in the dead of night because of her father’s actions.  Right now she and her mother have found a spot to stay if only dear old dad will behave (which won’t happen), a few goats, sheep and one llama to find grazing grass for.  In yet another get rich plan her father plans to have the women shear the sheep, clean the wool and – steal the very food the animals eat by letting them graze on a property that is not his.  It’s during one of those grazing moments that Arabella first sets her eyes on a handsome cowboy with magic in his hands as he slowly tames and trains a horse.  But she’ll only be able to watch from afar – no decent man would want anything to do with her or her family, at least that’s what she thinks right now.  Add a dandy of a guardian angel, a llama with his own ideas and one cowboy who is as smitten at first sight as she is – and watch the magic of true love happen.

As always I had such a good time being back in Creede, CO with Kit Morgan’s characters.  She always delivers a story full of wit, grace, humor, and love.  I’d not hesitate to recommend WATCHING THE WRANGLER or any title in the Cowboys and Angels series.