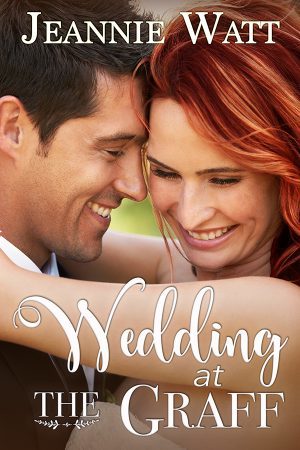 Luck of the Irish?

Collie Flanigan fled Chicago for Marietta, Montana to start a new life after breaking her engagement, but immediately hits a snag. Her ex-fiancé wants the ring back and sends his most trusted confidant and employee to get it. But the ring was stolen from her family years ago, and Collie has no intention of ever parting with the beloved family heirloom.

Collie’s college friend, Michael Donovan, thinks his mission is simple—quietly retrieve the ring to keep Collie out of jail and himself employed. He books a stay at the historic Graff Hotel, where Collie works in housekeeping, intending to quickly persuade her to part with the ring. Not so easy when Michael realizes he’s in too deep. he chemistry between him and Collie is still there, stronger than ever, but their timing’s always been off. Is now finally their time, and will Collie accept his ultimate sacrifice?

I had such an enjoyable time back in Marietta, Montana at the famous Graff Hotel once again.  Wedding At The Graff brings us the story of Collie, Michael and in many ways their grandmothers as well.  At one time Michael and Collie were friends, there was a spark there that neither was quite willing to pursue during their collage days.  Why ruin a perfect friendship with complications was the thought at the time, although that didn’t work out well for them in reality.  Collie became engaged to Michael’s then friend, now boss, Garrett… a quite nasty piece of work.  It eventually became obvious to Collie that the two would never work so she broke off the engagement but kept the engagement ring which had originally belonged in her family.  And that ring becomes almost as much of a character in this story as the others.

They cross paths once again when Michael’s boss sends him to deal with Collie and get that ring back, at any cost.  Garrett isn’t afraid to use his family name’s power to bring Collie up on charges if she won’t give the ring to Michael.  Collie’s grandmother believes that Garrett’s family stole that ring since it was collateral for a loan – and circumstances kept the ring away from the family who truly owned it.  It gets complicated in many ways.  Michael is realizing that those feelings he put aside for Collie long ago are alive and kicking again.  He’s in a hard place.  He is trying to warn Collie of what Garrett is willing to do to get the ring back while acknowledging that he does owe Garrett’s family as well.  Sorting out this mess created by people long gone will bring Michael and Collie back together… eventually.

Wedding At The Graff will reunite us with several old friends from this series.  I always love to catch up a bit.  I do admit that I keep hoping for Shane’s story, and maybe one day she will shine in the spotlight as well.  I loved this story, it’s complicated yet so very basic.  I believe any reader of Contemporary Romance will enjoy Collie and Michaels story, and I’d definitely recommend their story and the entire series.