Wedding Night with the Earl by Amelia Grey

Amelia Grey, The Heirs' Club of Scoundrels #3, Wedding Night with the Earl 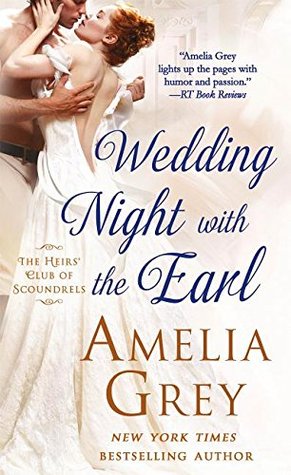 Can An Improper Proposal

Adam Greyhawke is through with marriage. After losing his wife at a young age, he’s more interested in carousing and gambling at the Heirs’ Club than taking another trip to the altar. When his obligations as the Earl of Greyhawke thrust him into the heart of Society, he dreads the boredom that only a ballroom can inspire in a roguish scoundrel. That is, until he meets a bewitching young woman who captures his curiosity—and reminds him just how delicious desire can be.

Lead To True And Lasting Passion?

Miss Katharine Wright is accustomed to men interested only in her generous dowry. Adam’s attraction is far more powerful—he tests her wits and her courage at every turn, until she finds herself longing to fulfill an everlasting passion she never imagined was possible. But the breathtakingly handsome nobleman is as stubborn as he is scandalous, and Katharine must be the one to convince him that real love is worth any risk.

Read on for my thoughts on Wedding Night with the Earl.  No true spoilers, promise.

Wedding Night with the Earl is a delightful and realistic story of the times.  Adam had lost his young wife and child during an excruciating childbirth.  At their deaths, which he and his dying wife blamed him for, Adam vowed to never marry or have children again.  It was a solemn vow which he had every intention of keeping.  Until he found himself with a title and a young cousin to care for.  He returned from his solitude to London to take up his title and obligations – and planned to groom his cousin for the eventual title that would pass to him.  The few good things about returning to London was being able to catch up with his friends and their growing families.  And the chance encounter at a ball with the lovely Katharine Wright.

Katharine has this last season to find a husband.  Her doting guardians, her aunt and uncle, have pampered, coddled and protected her since the carriage accident that claimed her parent’s lives and injured her leg to the point where she was unable to move about without the safety net of her cane.  But now she has made a promise to her uncle to choose a man to marry and set up her own household.  Her dowry has always been a draw for the gentlemen of the ton, but like all women she wanted to find love – but her time was running out.  Until a handsome stranger walked across the room and asked her to dance – and took her witty responses well without ever receiving that dance.  If only…

Adam was charmed by Katharine.  And while he wouldn’t pursue her in a romantic fashion, he could help her to learn to dance or walk without that blasted cane – which seemed more of an emotional cane than a necessary one, to him.  He never believed that she could capture his heart, and he stubbornly refused to acknowledge that she was everything that he would have chosen in a wife.

Katharine and Adam were a believable and loving couple in Wedding Night with the Earl.  Not only did Adam indeed help her to learn to dance, he brought out so much more in her life.  Risks that she would have been afraid to take were easy with him along with her.  She had been so protected all of her life, that one man who took the time to bring out the true Katharine within was a champion she never thought to find.  Yes, she loved him and she knew about his painful marriage with the loss of wife and child.  But she was convinced that they would be perfect for each other – if only he would give them the chance.

I enjoyed this one very much and would recommend Wedding Night with the Earl and the entire trilogy + one novella of The Heirs’ Club of Scoundrels to any Historical Romance reader.  It brings the stories full circle, reunites us with earlier couples as they are today and brings a deserving of love couple together in this conclusion to the trilogy.

*I received an e-ARC of Wedding Night with the Earl from St. Martin’s Paperbacks and NetGalley in exchange for an honest review. That does not change what I think of this novel.*

How To Handle A Scandal by Emily Greenwood

How To Handle A Scandal by Emily Greenwood