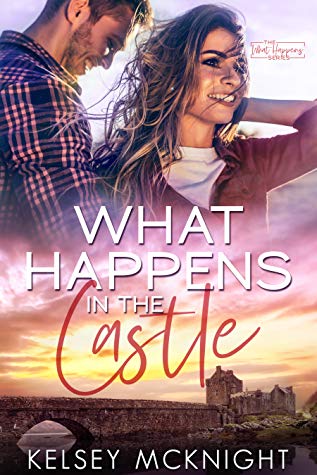 What Happens in the Castle is the third story in the What Happens series, and brings this series to a close which is always a bittersweet moment for me when I’ve enjoyed being part of several characters’ lives through their ups, downs and eventual happy endings.

Although Rose and Katie have found their forevermore happy endings, Savannah’s recently discovered that her boyfriend of several years is nothing more than a cheating scumbag and ends that relationship.  She won’t spoil Rose’s wedding with that knowledge since her now ex is a friend of Rose’s but Savannah is convinced he won’t show up for the wedding – she was wrong.  One sexy Scot will help Savannah prove to her ex that she’s as over him as she can get – but what if that pretend romance starts to feel very real, what if the dream Savannah’s worked so hard for back in America is now on the line because she really wants to stay with Rhys for her own happy forever ending.  Two people, two countries, two careers, one love – how is this supposed to end up without broken hearts involved?

I adored Rhys – I’ll just put that out there and bask in it.  Savannah and Rhys make a couple that you’ll be rooting for from their first meeting.  Yes, there are obstacles, potholes in the road to a happy ending but that’s also what makes life sweet and interesting.  Rose, Katie, Savannah – three friends who are so believable and realistic you’ll want to share this one with your own best friends.  I love that all three friends have been a part of each other’s stories along the way to some degree.

The descriptions, the word pictures of the beauty of Scotland will take your breath away and leave you feeling like you’ve stood in those amazing places that Rhys took Savannah to.  Watching this couple fall in love, work their way through their real and imagined roadblocks to find a love worth fighting for was an amazing journey.  I’m sad to see the series come to an end – but what a trip it’s been!