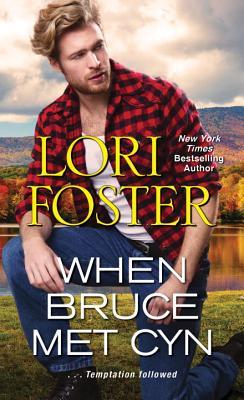 WHEN OPPOSITES ATTRACT . . .
Bruce Kelly has spent most of his life helping people who are down on their luck, guiding them toward making better lives. He understands that everyone makes mistakes, even if he’s never actually done anything but color inside the lines. Nobody’s perfect, but Bruce is about to meet a woman who’s perfect for him, even though she’s everything he’s not. He’s determined to show her he can be trusted. If that means being an absolute gentleman at all times, so be it. No matter how many cold showers it takes . . .

JUST GET OUT OF THE WAY
Cyn Potter is a survivor, with a sassy, gallows wit and a fierce independent streak to show for it. She’s used to men wanting only one thing, and she’s done with big bad wolves in sheep’s clothing. But Bruce is different. Totally hands off. Sometimes she sees a hint of fire in his eyes, but he treats her with the respect she’s always wanted. Yet, truthfully, he’s a guy worth letting down a few defenses for . . . along with a few other things. Maybe somebody needs to help Bruce discover just how perfect being imperfect can be . . .

Titles in the Visitation, North Carolina series include:  Fantasy (0.5) – Say No To Joe? – The Secret Life of Bryan – When Bruce Met Cyn – Just A Hint-Clint – Jamie

When Bruce Met Cyn is a classic and was originally released in 2004 – now we’re getting a new cover and a Mass Market Paperback Reissue.  I happen to love covers and the chance to re-visualize Bruce (and Bryan, since they’re twins) from this new cover is a delight.

Once again I was captivated by the characters in and the town of Visitation, North Carolina.  Cyn is a streetwise, snarky, sassy woman who has made the choice and now has enough money to step away from a life that was necessary at the time.  She’s had dreams of a town, of a man and impulsively  waves a finger over a map and makes her decision of where to head for her new life.  Right into Visitation and perhaps a date with destiny.

I really liked Bruce and Cyn together, on the surface they may seem complete opposites but they match up where it counts.  We’ll get the chance to catch up with other couples in the Visitation, North Carolina series and see some future possibilities as well.  I had fun with When Bruce Met Cyn, there’s an opposites attract feel, definitely steamy moments, a solid romance, true danger and a touch of mystical warnings at times.

If you’re in the mood for a really good, satisfying romance then I’d recommend you check out the reissue of When Bruce Met Cyn.  You’ll find a story that will keep your attention riveted on the page, likable characters, a vile villain, a few twists and turns and an emotional love story.  If you haven’t already, this story will make you want to check out the entire series of Visitation, North Carolina for yourself… I’d highly recommend that you do just that.

I received an e-ARC of this novel from the publisher via NetGalley. That does not change what I think of this story. It is my choice to leave a review giving my personal opinion about this book.*