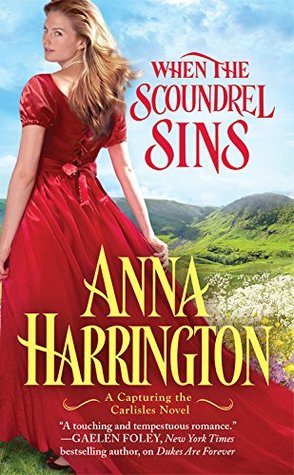 Annabelle is facing an uncertain future.  She must marry by her twenty fifth birthday, which is rapidly approaching, or lose her inheritance the only home she’s known.  She had wanted to find love, to be that one special person in a man’s life – instead she had a ruined reputation from a simple kiss.  Life is far from fair and in desperation she knows exactly who is to blame for her circumstance… and he owes her.  Proposing marriage, even a marriage of convenience is not an easy task, but she will not lose her home.  When Quinn refuses her demands but counters with an option of his own Annabelle is left with little choice.  Quinn will help her find a man to marry well in time, and she will get her happy ending while he sails off to America and his own future.  Except it didn’t quite work out that way.

While I enjoyed When A Scoundrel Sins very much, I also have to admit that Annabelle and Quinn often frustrated me both individually and as a couple.  Quinn has a serious case of “I don’t want her but you cannot have her” attitude for the majority of their story.  He seems to have no real concept that his teasing her out into the night and a single kiss completely stole her future, her reputation from her.  I got that as the youngest son he needed to prove himself to his family by becoming a success in America.  But real men own up to their mistakes and make things right.  His constant finding fault with every single man that Annabelle might have found a future with was both telling about his own feelings for her and exceedingly frustrating to me.  Yes, they did work their way to their happy ever after… but the road there was long and complicated.

If you love Historical Romance then I believe this story or the entire series would be something you’d want to pick up.  I’ll be following the rest of this series and will be watching for the next release in the spring of 2018.