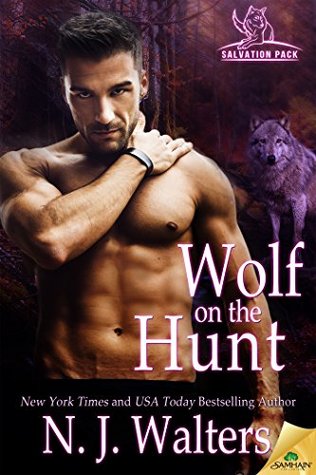 I’ve been waiting for Louis to find his mate, and what an excellent choice the fates have in mind for him in Gray.  An artist who creates the most beautiful nature paintings and drawings, Gray has come to the Salvation area to simply soak up the beauty around her in order to do some dedicated painting.  She and her wolf/shepard mix dog and constant companion, Shadow, expected quiet, nature’s beauty and some time to relax.  What she discovered was far, far from her expectations.

Louis is enjoying life.  Since leaving his insane father’s pack, he and his brother and pack mates have created a good place, a strong pack and life would be perfect but for two things – the fact that his father intends to kill all of then at the first chance for daring to leave his pack, and out of all the members of his new pack, Louis is still without his mate.  Of course, there is never a guarantee that he’d ever find that one woman who is his alone, his mate, his love – but watching the happiness that finding their mates has brought to his brother and pack mates leaves a bit of a hole in Louis’ perfect life.  Loneliness is a thorn in his side that he believes he’s just going to have to endure.

While out on patrol, Louis is attacked by hunters while in his wolf form.  Hiding from the hunters, bullets painfully scattered within him. Louis is astounded to see a woman and her pet come out of the forest to his aid.  It cannot be, not like this – but yes, this brave woman who is facing what she believes to be a wild wolf and is willing to shelter and protect that wolf from the hunters… she is his mate.  With new strength and determination Louis goes with the woman and allows her to tend to his wounds… and tries to figure out how to let her know that he’s not exactly what he seems.

Wolf On The Hunt is such a fast paced, intense story of love, acceptance and family, blood or not.  Gray has a surprise of her own and when Louis tells her exactly what she is, aside from his mate, her life is suddenly complicated and makes perfect sense at the same time.  Answers are always better than not understanding, but this is a lot to take in.  Louis will do everything in his power to show Gray that she is his mate, meant to be together within his pack – and Gray will hesitate, longing and fear fighting within her as she gets to know the Salvation Pack and decides what her future holds.  Of course, old enemies return and finally there is a resolution to an ongoing battle for peace.

I really enjoyed this one and I believe anyone who enjoys Shifter Romance would as well.  This is the fifth story in the Salvation Pack series.  I believe that even if you haven’t read the earlier books that you would enjoy this story.  There is enough back story and explanation of who everyone is to make it a smooth story without glaring holes that you need filled in.  Yes, of course any series is best read from the beginning – but you don’t have to in order to enjoy Louis and Gray’s story.

*I received an e-ARC of Wolf On The Hunt from the publisher and NetGalley in exchange for an honest review. That does not change what I think of this novel.*

« The Thing Is by Kathleen Gerard
Complicated by M. M. Koenig »