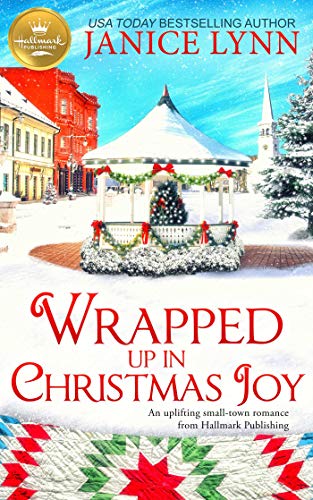 Wrapped Up In Christmas Joy brings something very real that so many returning military personnel experience… PTSD and survivor’s guilt.  It’s done in a kind way but a realistic view of one soldier’s experience and the lie he tells himself about the one woman who sees his as a hero but a human one as well.

Sophie finds the journal of a soldier returning from the war in a donation box she’s sorting through.  It’s a devastating account of one man’s pain, his thoughts, and his emotions of that life-changing experience.  She’s convinced that he could not have really meant for it to be tossed away and sets out to find him in their small town, which is not difficult to do at all.

Cole believes he’s faced his feelings about his time as a Marine, the experiences he had, the life he led is now far behind him.  A born helper, Cole is now working at the local fire station and is shocked when Sophie tracks him down with the journal that he wants nothing to do with.  While there is a spark of attraction between them, Cole is convinced that the only thing Sophie feels for him is pity at what he privately expressed in that journal.  It will take a town’s residents, one stubborn woman, and an awakening moment to show Cole that what he needs most is the woman he’s pushing away.

I enjoyed Wrapped Up In Christmas Joy very much, and it certainly is filled to the brim with everything I love about a Christmas Romance.  But Cole had to work his way into my heart for his belief in the lie that he keeps telling himself is turning him into quite a jerk around Sophie.  I kept waiting for Sophie to stand up to his meanness and tell him off… but she was simply being true to her personality.  They work so well as a couple but they’ll have to get past Cole’s instinct to turn everyone away before their happy ever after can happen.

If you love an engaging Christmas Romance with a hero who needs a stern talking to… then you’ll love Wrapped Up In Christmas Joy.

Available in paperback, audio, or your favorite e-reader

« The Cowboy Who Saved Christmas by Jodi Thomas; Sharla Lovelace; Scarlett Dunn
Looking for a Cowboy by Donna Grant »