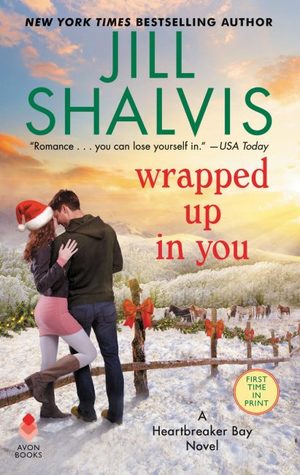 After a lifetime on the move, Ivy Snow is an expert in all things temporary—schools, friends, and way too many Mr. Wrongs. Now that she owns a successful taco truck in San Francisco and an apartment to call home, Ivy’s reinvented life is on solid ground. And she’s guarded against anything that can rock it. Just like the realities of the past, she’s worked hard to cover up. And especially Kel O’Donnell. Too hot not to set off alarms, he screams temporary. If only his whispers weren’t so delightfully naughty and irresistible.

Kel, an Idaho sheriff, and ranch owner who is on vacay, but Ivy’s a spicy reason to give his short-terms plans a second thought. Best of all, she’s a tonic for his untrusting heart, burned once and still in repair. But when Ivy’s past intrudes on a perfect romance, Kel fears that everything she’s told him has been a perfect lie. Now, if only Ivy’s willing to share, Kel will fight for a true love story.

While my heart is truly in San Francisco with the Heartbreaker Bay series year-round, I adore the Christmas-y background feel while the romance is front and center in WRAPPED UP IN YOU.  It’s always a treat, for me, when characters cross over from other series.  If you’ve read Ms. Shalvis’ Animal Magnetism series then you might recognize Kel.  (If you haven’t read that series yet, no worries, but I’d highly recommend it to add to your TBR – amazing stories).

Ivy hasn’t had the easiest life, but she’s put down roots now, has her own “infamous” taco truck business and has gathered some precious friends around her.  She may always have an eye out for trouble to come in and ruin everything, but she’s living a life she enjoys and feels safe, for now.  Kel is visiting friends while recovering from an in the line of duty injury.  Two weeks in beautiful San Fransisco should have him back in working shape in no time.  Kel hadn’t expected Ivy to burst into his life, for her to mean so much so soon, or for the trouble that finally showed up on her doorstep once again.  Now two people who have a strong connection need to battle the past and fight for a future that might not be exactly as they thought.

The ongoing, woven into each story, the legend of the fountain always brings a smile to my face.  Because who knows?  Maybe there’s a bit of magic in that fountain after all.

I had such a good time with WRAPPED UP IN YOU, revisiting old friends again and experiencing a love story that touches the heart, has lots of sizzle and a few surprises in store.  I’d not hesitate to recommend this story or the entire series to any Romance reader who loves a really good romance, believable characters and a circle of good friends.  I had a blast, and I believe you’ll fall in love in Heartbreaker Bay once again.