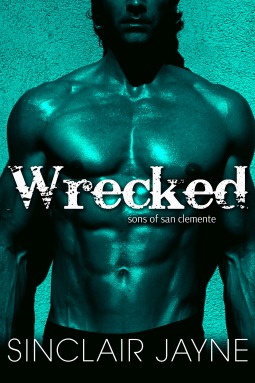 Hollis Remington is slinking home to San Clemente, California. Needing to hide out at her grandmother’s beach cottage to lick the wounds from her latest professional failure, she’s stunned to find her ex lover and professional surf god, Kadan Carson, lounging in the only bed. Naked. Hollis can’t afford a hotel, and no way will she let her family or friends know she’s broke, but Kadan’s refusing to leave. He does, however, agree to share…

Professional surfer Kadan Carson is recuperating after his third ankle and foot surgery, and while it’s highly possible his professional career may be over on the brink of his most lucrative corporate sponsorship deal, he’s determined to fight the inevitable effects of age, gravity, and injury on his body in private. No fans. No nurses. No distractions. Until Hollis shows up, who has always been one hell of a distraction. Six years after she walked out for the last time accusing him of infidelity, she’s still the one woman he hasn’t been able to exorcise from his heart, head or body. And he doesn’t really want to.

There’s no way Hollis can forgive, but she also can’t forget. Kadan was and is her first and only love. Can she help him to heal without losing her heart again?

Read on for my thoughts on Wrecked.  No true spoilers, promise.

Hollis and Kadan’s lives had been wrapped together since they, or really she, had been a kid.  Her crush started at age 12 and try though she did she never outgrew it or her love for Kaden… or her mistrust.

Now she’s back at her grandmother’s beach house hoping to start all over again on her life plan.  Again.  She’s never fit in any of the careers she’d worked so hard at – maybe because she’d never done them for herself but by trying to live out her twin brother’s life.. if he hadn’t drown trying to follow in Kaden’s footsteps.  What she never expected to find was Kadan.  At the beach house, injured and fully expecting to stay right where he was.  As if she’d never run out on them before… and she was determined that this time he would go, not her.

Wrecked is a lovely, introspective look at how two people, in love, can see each other and their shared lives so very differently.  Hollis had let her insecurities take her on the run from her relationship with Kaden so many times.  Kadan had loved her and believed with everything in him that she’d return… some day.  Right up until he’d just about given up for some day to ever arrive.

Two people who knew each other so well and so little.  Physically they are a perfect match,neither denies the sexual attraction or the emotional one either.  It’s getting past what Hollis believes are lies and deception and getting her to see Kadan and their lives together clearly with honesty and insight that will finally repair the breach between them.  But Hollis is nothing if not stubborn.  And the truth as she sees it is instilled in her so deeply that Kaden will have to have patience, love and determination to find the way to let her see what was her truth really wasn’t the truth at all.

I enjoyed Wrecked very much. In fact, I have a friend who is so very much like Hollis, it’s like reading her own story.  Yes, there are people who believe so little in themselves and paint the world from a paintbox of their own making that getting them to see the actual truth is a giant undertaking.  So, I understood Hollis – wanted to shake her a lot, but I “got” her.

I would recommend this romance for anyone who enjoys a deeply sketched personality in their heroine, who enjoys a love story that is meant to be no matter how long it took to get to the happy ending.

*I received an e-ARC of Wrecked from the publisher and NetGalley in exchange for an honest review. That does not change what I think of this novel.*