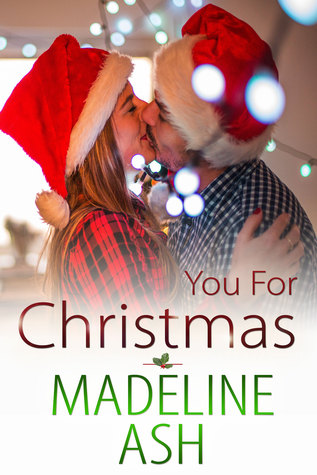 Regan Case wouldn’t know the right side of the tracks if they ran her out of town. She’s lived hard since she ran away at sixteen, but eight years later, an accident has terrified her into pulling her life together. And that means finally going home for Christmas.

Taking her return one step at a time, she ends up on the doorstep of her sister’s best friend, Felix Nickson. The man indebted to her after she jammed ten grand down in trousers in high school and enabled him to escape his own demons. Felix agrees to let her stay, but doesn’t count on the chemistry that burns hot between them.

As they get into the Christmas spirit, he watches Regan’s shadows fade away and discovers that beneath her careless attitude, she is by far the bravest woman he’s ever met. He falls for her, fast and hard, but she fears she doesn’t deserve such a good man. A black sheep cannot change her colors.

Can Felix forgive her past or would asking for his love be one too many miracles this Christmas?

Read on for my thoughts on You For Christmas.  No true spoilers, promise.

I’ve been sitting here, staring at a blank screen trying to corral my emotions together to tell you about this simply amazing story.  But truth be told You For Christmas has me completely gobsmacked.  (yes that is a word, look it up and you’ll understand why I used it.)

On Felix’s last day of class Regan convinced him to leave home, escape the abuse from his father and start over someplace new.  As she dropped ten thousand dollars down his pants she overrode his objections.  They both knew he needed to get away.  Her only demand was for him to take her sister, Stevie with him.  Run far and fast – and build on his dreams.  Without his knowledge, Regan planned to take the other ten thousand and escape as well. She just couldn’t go with them, she would bring danger to both of them so she set out on her own…at sixteen years old.

Eight years have passed and now Regan is standing outside of Felix’s door – praying as she never had before, for a chance at redemption, a place to rest and the chance to explain to Stevie and Felix the reasons why she ran – and why she stayed away so long.  Regan was sure they would turn her away.  She was convinced that what had happened to her would forever close her off from her sister and her friend.  But she had to connect with her sister again.  She had her reasons, even if she didn’t know how to express them anymore.

On the surface, You For Christmas seems like a lighthearted, airy Christmas romance.  It’s not.  Regan first comes off as a character that isn’t very likeable.  She’s rough, sarcastic, rude with an attitude to challenge anyone in her way.  Slowly as we read more of her story the layers begin to fall away and the true Regan emerges.  This is one brave, frightened, lonely woman who simply wants her life, her family back – but has no clue how to go about that since she is convinced if they knew her truth they would turn their backs on her.  But as afraid as she is, she must try.. she’s just wanting to take baby steps to get to that first meeting with Stevie.

I want to say that as important as the romance between Felix and Regan is to the story – it almost becomes secondary to the desire to see this wounded soul heal in any way possible.  It is a story of one woman’s recovery from a past that no one should ever have to face.  I suspected what had happened to Regan before the reveal.  Yet I will admit to having tears streaming down my face as I read the reunion between Regan and Stevie – and Regan’s truth finally revealed.  Heart wrenching doesn’t even come close to how it felt.

This is a powerful story.  A Christmas that these two sisters and one friend will never, ever forget.  And, if you have read any of Ms Ash’s other stories don’t be surprised to find yourself reunited with two couples who already have their happily ever after.

I would urge you to read You For Christmas the first chance you get.  You will be rewarded with a powerful story, believable characters and a heroine who will find her way into your heart so easily.

*I received an e-ARC of You For Christmas from the publisher and NetGalley in exchange for an honest review. That does not change what I think of this novel.*