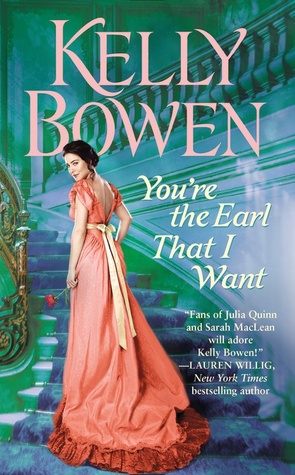 For businessman Heath Hextall, inheriting an earldom has been a damnable nuisance. The answer: find a well-bred, biddable woman to keep his life in order and observe the required social niceties. But it’s always been clear that Lady Josephine Somerhall is not that woman. Once a shy slip of a girl, Joss is now brilliant, beautiful chaos in a ball gown.

In her heart, Joss has always loved Heath, the one person she’s always been able to count on. That doesn’t mean she wants to marry him though. Without a husband, Joss can do as she pleases—and now, it pleases her to solve the mystery of an encoded file given to Heath by a dying man. It’s put Heath in peril once, and Joss won’t let that happen again. She’ll do what she must to ensure the earl’s safety. And to remind him that what she lacks in convention, she makes up for in passion.

Read on for my thoughts on You’re The Earl That I Want.  No true spoilers, promise.

Joss loves Heath.  He’s been her friend forever it seems, but she has no intention of marrying any time soon.  Why would she want a husband to prevent her from enjoying adventures or doing as she pleases?  And right now it pleases her to solve a mystery – one that will also save her friend Heath.  And that’s all he is, right?  The fact that he has grown up so handsome, and sparks a far different response than ever before – that’s beside the point, isn’t it?

Heath’s newly inherited title and all it entails is simply a bother.  He’d much rather be tending to his business not acknowledging that he needed a wife, one who knew her way around the social obligations that now are choking him.  Too bad that Joss has no intention of marrying.  Or so she says.  He has loved Joss for as long as he can remember but she’s too high strung, too intent on getting into mischief to tempt him as a candidate for his wife.  Right?  It would be foolish to think that Joss would want to marry him, but maybe he could convince her.

You’re The Earl That I Want is such a fun, delightful tale.  Joss and Heath are two people who really belong together, now comes the convincing them part.  A mystery will toss them together in ways that will encourage sparks to fly.  I enjoyed Joss so much.  Determined yet vulnerable, but she’d never show that.  Stubborn and curious are a tempting combination, and Heath will need all of his wits about him to keep her safe and convince her to marry him.

I would definitely recommend this story to anyone who enjoys a lively, feisty heroine and a stubborn, determined hero.  These two were perfect for each other and the sparks fly whenever they are together.  If you love  Historical, Regency Romance then this novel should be on your reading list.

*I received an e-ARC of You’re The Earl That I Want from the publisher and NetGalley in exchange for an honest review. That does not change what I think of this novel.*

Tags: Historical romance, Kelly Bowen, The Lords of Worth #3, You're The Earl That I Want

« On The Hunt
Just Say Yes by Alyssa Goodnight »