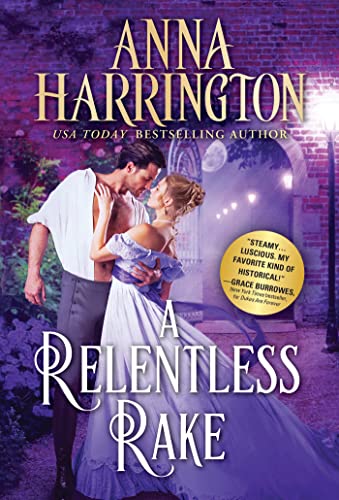 A Relentless Rake is the fourth title in the Lords of the Armory series and delivers a delightfully charming story sizzling with chemistry and intrigue.

Alec and Olivia despise secrets and being lied to… yet, each is keeping secrets for their own reasons, and while they might have good reasons for the deception those secrets will play a large part in their trust issues with each other.  Alec is on the hunt for the nobleman who was part of a plot to assassinate the prime minister, and he has good reason to believe that man is Olivia’s brother, Henry.  He’s also uncertain of Olivia’s part in this – is she as innocent as she appears or is that underlying secret of her’s an implication of guilt.  Alec has no problem allowing the ton to believe in his former reputation, although he’s brought himself into a better place in his life he does not announce that fact to the entire world.  Let them think what they will as the ton’s opinion of him helps him perform his duties as part of an undercover group of men protecting the government in many ways.  He is rigid in his beliefs, often to the point of being somewhat abusive in his responses to those he deems unworthy of his trust… like Olivia.  He knows she’s hiding something, and until she opens up about that secret she’ll remain enticing but untrustable.

I adored Olivia.  Yes, she has a secret, one born of an impulsive youth and society’s rules.  She’s done everything possible to walk a very thin line of respectability as life as she knows it depends on no one learning of her past degression.  She’s strong, at times impulsive, loyal yet untrusting, and prays that the rumors about her brother are not true but still suspicious about him herself.  She’ll do anything to save Henry but must that include trusting a rake like Alec?

I am torn on Alec.  He’s definitely a sexy, controlling man.  Yet the way he often treated Olivia, his attitude upon learning her secret took him down a few notches in my good opinion of him.  He wants trust from others but refuses to give it in return.  I think Olivia soften me towards Alec, but he isn’t my favorite hero of this series.

A Relentless Rake is full of danger, secrets, sexy moments, sizzling chemistry, lies, and hard-won truths.  I enjoyed myself, but I still find that my favorite of this series continues to be the first story, An Inconvenient Duke.  If you enjoy a story filled with intrigue, history, a sensuous couple fighting their way toward a forever kind of love then you’d enjoy Olivia and Alec’s story.