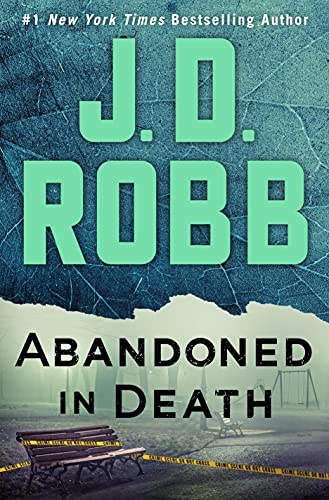 Abandoned in Death is the 54th title in the ongoing “in Death” series — and this case is intense in so many unexpected ways.  We’ll run into Eve’s usual crew, plus a few we don’t see that often, as we delve into the mind of a madman and the desperate search to reach his victims before he reaches a breaking point resulting in his captive’s deaths.

Every book in the “in Death” series gives me the feeling of speeding through the story with a clock ticking over my shoulder as I read… but Abandoned in Death had that ticking clock a little louder, the tensions a bit higher since we have one death but more victims to find before they also end up losing their lives.  A touch unusual was the use of “now” and “before” time periods in small bites that added to the understanding of why without giving away the killer… just yet.  Hey, I’ll take clues in any form that I can find them, and speaking of clues… I completely missed the one clue that would have given everything away.  An unimportant, completely normal, non-flashy sentence… and I missed it.  You’ll see.  And you’ll remember that sentence, just like I did I’m betting.

I enjoyed the pace of Abandoned in Death.  We feel the terror and determination of the women being held while experiencing the often mind-numbing steps of tracking down information, following leads, examining the evidence, and also feel the frustrations of the detectives and support techs when that information isn’t coming fast enough.  Police work (now or in the future) involves connecting the dots, tieing up loose ends, double- even triple-checking information… it’s not all speed chases and firefights.  And it comes to light in this story in a very real way that it takes a crew of dedicated professionals (and one civilian consult) to put it all together and get the killer.

Another amazing visit to a world that I love visiting twice a year (not counting re-reads).  Abandoned in Death is a well-written, emotional, intense journey to catch a killer, rescue victims… and meet up with old friends.  The core people of this world have grown, changed slightly over the course of 54 books (and several novellas) so it’s hard for me to imagine it as a stand-alone story.  Yet, I do believe there is enough here to make the reader want to go back to the earlier books.  That choice is yours, but I do recommend this story if you enjoy putting puzzles together, and love characters who keep you on your toes throughout the story.

I own a Kindle edition of Abandoned in Death.

« The Fall and Rise of Ronni Fairweather by Gina Hollands
Light in The Dark by Kate McWilliams ~ Publication Day! »