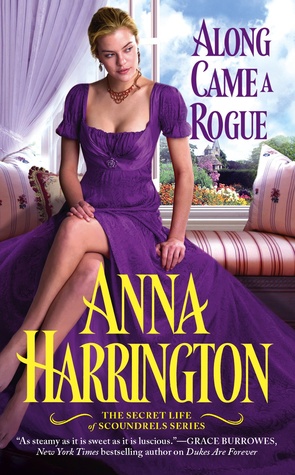 I will be totally frank – Along Came A Rogue had me hooked and eager for the rest of the story at the opening shot.  Yeah.  That got my attention for sure.  Nope, you gotta read it yourself.  *grin*  But, you’ll get it right away.

Nathaniel may be considered a rogue, a rake and a scoundrel, yet at heart he is a true gentleman where honor, loyalty and true friendships matter the most.  When one of his best friends is injured and is asking for his sister to return home, Nathaniel will do everything in his power to grant that request – even if he has to drag Emily kicking and screaming all the way home.

What he didn’t expect was to find the young lady who he’d once flirted with had turned into a stunning beauty – with a shotgun aimed at his chest.

Once upon a time, Emily had such romantic dreams about her brother’s best friend, Nathaniel.  Years ago they’d had one flirtatious night and quickly they’d been parted.  Both had moved along with their lives.  Emily had married and was now a widow – with a dangerous secret.  Seeing Nathaniel at her door brought back that spark from her youth, the dreams that had never truly died but had been tucked away in her memory.  Now, here he was, even more handsome than she had remembered and sexy as sin if she was honest with herself.  And she had no choice really but to return home with him – in spite of her worries and fears.  Emily’s secret meant that someone was determined to harm her… and she was bringing that danger right to her brother’s doorstep.

I was totally captivated by Along Came A Rogue.  Emily and Nathaniel’s story was intense, full of secrets, sexy and hot as a burning fireplace and along with a few unnecessary sacrifices, a truly made for each other love story.  Sometimes in stories we meet people that we wish were truly real as they would make such interesting and fun friends to have for ourselves.  This couple gave me that feeling.  I hope you get that feeling from their story as well.  Now, I’m ready to dive into the next novel in the series.

If you love bad boys with a golden heart, secrets and mysteries that capture your attention, and a really good story then Along Came A Rogue should be on your reading radar.

*I received an e-ARC of Along Came A Rogue from the publisher, Forever (Grand Central Publishing) and NetGalley in exchange for an honest review.  That does not change what I think of this novel.*