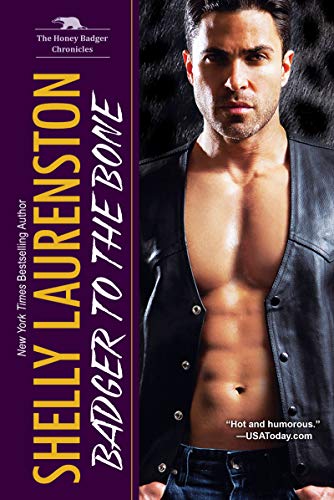 Max is sassy, stubborn, definitely crazier than anyone else around, but she is also one kick-butt honey badger shifter who you do not want to mess with – and someone just did.  Time for the evil family members to make a play again, this time by trying to kidnap Max and she’s having none of it especially when a jaguar shifter is in on the action against her – but wait, Zé didn’t know he was a shifter?  Oopsie.  Well, he does now and he’s about to get lessons about that magical world from a woman who can go from calm to crazy, to kick your butt around the block faster than anyone he’s ever encountered before.  And he’s about to be taken on a whirlwind adventure with sisters, evil family members, and just maybe fall in love with a butt-kicking honey badger along the way.  Life just got interesting for Zé.

Badger to the Bone is the rip-roaring, action-filled, intense third story in The Honey Badger Chronicles series – and if you haven’t read this series yet then I’d gently suggest you start at Hot and Badgered and move forward first (if you can, I know not everyone can do that) for these sisters have a collective tale to tell, plus they’re all really good stories.  The romance between Max and Zé simmers throughout their story, it is not the main focus the fast-paced action part is more the main story, but they blend together so well that it reads as it should when Max is involved in the situation.  We will also meet up with some characters from the earlier series, Pride so when you meet them here I’d definitely recommend checking out their stories if you can, again, well worth the time and effort for these additional stories.

I’m not going to go into any details here – you really need to experience Max and Zé firsthand but it is an intriguing story that never ever seems to slow down.  I had a blast, and if you love a good shifter story, or diving into a paranormal world then this is the story or/and the series for you.  Highly recommend.

Available in paperback, audio and e-readers (mine is the Kindle)