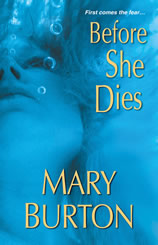 A crystal ball is not always necessary to know that evil walks among us.

“Before She Dies” was an enjoyable read.  As a child of the carnival myself, many parts of the story had me smiling in memory of my childhood years traveling the carnival circuit with my parents.

But.. to my knowledge we never had a murderer among us!

Charlotte (Grace) Wellington’s sister Mariah was murdered.  Grace left the carnival world and set out to make her own life away from the memories, and the people of her past.   Yet the past rarely stays in the past.

Grace or Charlotte as she is now known, hides memories and her past behind the tough surface of her criminal lawyer career.  She rarely lets anyone in.  Detective Daniel Rokov is determined to get past the line she draws between personal and professional.  It’s a difficult task but one that Daniel will succeed at.

The carnival is in town – and women are being murdered.  His mission is to destroy the witches.  He takes great pride and pleasure in dealing out his kind of justice.  The seer, the witch, the one who has knowledge that she should not have will pay the ultimate price.

I completely enjoyed this novel.  It is the first of Mary Burton’s work that I’ve read and it will not be the last.

Her story was fast paced.  The characters are rich and smoothly intertwine with each other throughout the story.

I adored Daniel’s grandmother who can honestly claim to be a seer.  But it was her no nonsense attitude that I loved.

While trying not to fall in love with Daniel, Charlotte must face her past and survive an attack that could claim her future.  There were twists and turns throughout the story.  Characters show up along the way and one thinks… “is that the killer, it could be”.   Enough clues to let the reader see if they want to try to solve the “who done it”… but not blatant enough to spoil the surprise for those that just want a good read.

I had picked the killer – and then tossed the character back thinking that’s a red herring!    Sneaky writers.

“Before She Dies” is a good read, perhaps not exactly relaxing but engaging enough to keep one’s attention on the pages.

Before She Dies  is Available at Amazon and on Kindle