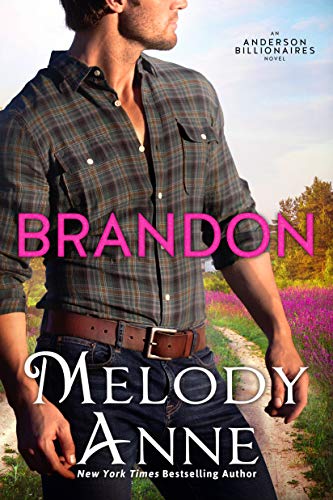 I have loved the entire “Anderson family” world from the beginning, many loves and stories ago, so it should surprise no one that I adored Brandon and Chloe’s hard-fought-for happy ending without a doubt.

As the third title in the Anderson Billionaires series, Brandon brings us a couple who once had one night together years ago and moved on.  Brandon’s work on the veterans center will bring him back in contact with a woman he’s realizing he never should have let go… now to convince Chloe of that fact.

This former Air Force pilot, definitely former playboy has matured in the years since last seeing Chloe, recently he’s wondering what he’s missing as he watches his brothers fall in love and start a different future as part of a couple.  Thanks to the meddling of one particular uncle Chloe and Brandon will be working together, the rest is up to fate or Brandon… or maybe Uncle Joe if these two can’t get the message.

Chloe is a perfectionist who has no time or interest in romance for it always ends messy and badly so she’d rather forget the whole thing.  Unfortunately, she’s been hired to create the new kitchen for the veterans center which means coming in contact with and working closely next to a man she never forgot – hard as she tried.  Brandon may have changed his spots but she’s not buying it for a minute… but tell that to her heart that wants to believe.

Brandon’s slow, methodical ‘working his way under her skin’ approach really was the only one that would work with Chloe.  He shows her in actions as well as words that he’s in this for the long haul, and that they are right for each other.  There were moments when I really wanted to sit Chloe down for a stern, loving conversation but her friends did that for me.  It will take a while to convince this stubborn woman where her heart, her future lies but once that light bulb goes off she’s never going to look back.

I had such fun back in this particular Anderson world again.  If you’re in the mood for a really good romance, one that doesn’t come easy but is worth all the hard work then Brandon should be on your “need to read” list.

*I received an e-ARC of this novel from the publisher, Montlake via NetGalley. That does not change what I think of this story.  It is my choice to leave a review giving my personal opinion about this book.*

Available in a variety of formats, including for your favorite e-reader, mine is the Kindle