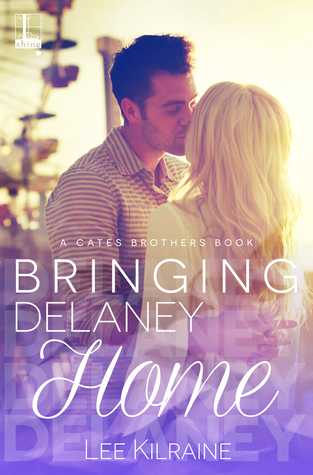 In the sleepy town of Climax, North Carolina, all five Cates brothers are known for being tall, dark, and delicious. But each has his own incomparable love story…Quinn Cates has known Delaney Lyons forever. But after years away from home, Delaney’s a changed woman. A mysterious accident she refuses to talk about has left her hurting–in body and soul–and acting out in dangerous, and occasionally entertaining, ways.

Quinn’s on the local police force, so he’s used to dealing with troublemakers. This one’s pretty incorrigible–but he suspects her flippant exterior is hiding something softer and deeper inside. Every time he has to rescue Delaney from herself, his heart and his hormones both go into overdrive. But he owes it to Delaney’s sister to keep an eye on her. He’s got some experience with that after spending so much time at it back in high school…

Delaney just wants to fend off the gossips, fight off the pain of her past, and make her escape once again. But Officer Cates is ordering her not to leave town, and his interrogation techniques can be very persuasive.

Read on for my thoughts on Bringing Delaney Home.  No true spoilers, promise.

Bringing Delaney Home is an emotional story on many levels.  Delaney has not had an easy life, and she holds many secrets close.  While serving overseas she was injured in an explosion and her injuries, both physical and emotional have rarely given her a moment’s peace from the physical pain.  She’s not taking care of herself so her sister has enlisted the help of a friend to go fetch Delaney home to heal, recover and begin her life once again.  The person she sent to bring Delaney home and to her senses just happens to be a man who had a crush on her during their school years.  And Quinn isn’t really sure he’s the right person for this task, yet for his best friend he’ll try.

As this is the first story in the series, I expected to meet many people and become accustomed to life in Climax, North Carolina.  I happen to love small towns and this one is full of interesting people, many who will have their own tales told in time.  Secondary characters matter to me as they are the backbone of a series.  There are several people who stood out for me, and others that I’m hoping will be more fleshed out as time moves on in this series.

I enjoyed Delaney and Quinn’s story.  Delaney is a tough character to love.  While attitude and snarky-ness are understandable given what her life has been like, at times she became a bit too much for me to like, let alone root for.  I felt for what she’s experienced, but I’d hoped that Quinn’s steady love for her would have softened her a bit.  Yet, that interpretation is on me as I read it, not necessarily on the author – she gave me the words, how I react to them is all me.  Bringing Delaney Home is a very interesting slant on a second chance love story – and the wounded Vet being the heroine, instead of the usual surly, grumpy Hero adds another level of interest to the story.

While I liked the story, a 3.5 rating is a “good story” rating – I didn’t love it, no, I’ll be honest about that – but I did enjoy my time spent with the characters.  I’ll definitely pick up the next story in the series to see where Ms. Kilraine takes her characters.

*I received an e-ARC of Bringing Delaney Home from the publisher, Kensington Books – Lyrical Shine and NetGalley in exchange for an honest review. That does not change what I think of this novel.*

« Fade Into You by Tracy Wolff
Wicked Burn by Rebecca Zanetti »