Posted May 19, 2017 by Marsha in Contemporary Romance, Series / 0 Comments 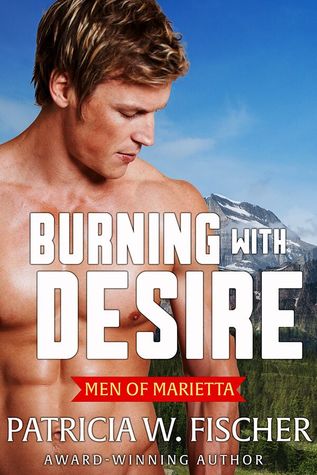 Burning With Desire brings the Men of Marietta series to a close with a solid, engaging story of three newcomers to Marietta looking to start over.  This town with a heart as big as the Copper Mountain that overlooks it is certainly a great place to find a fresh beginning for any reason.

Kyle has found something here that he cannot find elsewhere, invisibility.  Here everyone knows his as the new guy in town, the firefighter, the EMT and unfortunately one of the guys on that calendar.  The press hasn’t discovered him as of yet, but that’s always a possibility considering the notoriety of his birth and his parents.  He’s of two minds about that calendar – yeah, money to help get Harry’s House up and running is a goal that every person in town is behind, yet if the wrong person sees his face on that spread… well, he’s hoping that won’t happen from a small town calendar.  Yeah, more like wishful thinking.  The arrival of his new next door neighbor puts those thoughts out of his head, at least for the most part.  Gabriella and her daughter, Trinity are much more pleasant to think about than being discovered.

Gabriella is in an almost desperate need of a new start.  Not a do over, no that’s not going to happen.  But she can build again in this new town far from the problems and people who have hurt her, tried to harm her and control her.  Here she and Trinity can make a new base.  As the owner of the local diner she’s guaranteed to build a community around herself and her daughter that will protect them from the past – or at least that is her hope.  One huge added bonus, her new next door neighbor, Kyle.  If there ever was a welcome sight at the end of the day it would be that man.  Now she has to decide how much of her past she’s going to bring into her future – trouble is, that decision is not always in our own hands.

I enjoyed Gabby and Kyle’s story.  The drama comes from outside sources, and it only brings these two closer in the end.  It’s always enjoyable to catch up on other couples at the ending of a series, and this one was no exception.  Harry’s House is going to help a lot of kids in Marietta, and it’s going to be interesting to see how this location plays out in future series based in this much loved community.  I can’t say that the series ended with a bang, but it did end with a satisfying closure that leaves open doors for the future.  And that’s what community is all about.

I’d recommend Burning With Desire to any Romance reader.  A solid story, a few issues to be dealt with, believable plot lines and secondary characters who make the story more realistic, and yes, even comfortable.