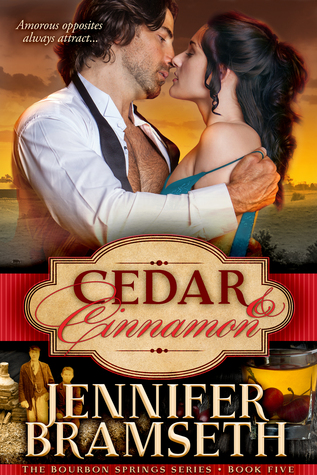 Harriet Hensley usually enjoys the legal work and other tasks that come with being an attorney for Bourbon Springs’ most important business, Old Garnet Distillery. But when Hannah Davenport asks her to help with a project to help the distillery apply for National Historic Landmark status, Harriet isn’t excited, but not because she doesn’t think the work would be dull. It’s because of the guy with whom she’s going to have to work.

Goose Davenport, Hannah and Bo’s cousin, has been known for years as the local hothead, the crazy guy who seemed to hide behind his father’s badge—the late former Craig County Sheriff Fuzzy Davenport. And a few years earlier, Harriet, the local little-miss-perfect and former Miss Bourbon Daze, had a taste of that wild side of the man—and found she liked it quite a bit. But despite their mutual attraction, fate denied them the chance to see what happened next, and they kept the fact of their encounter—and feelings—to themselves.

Working with Goose presents new professional, personal, and legal challenges, and feelings suppressed for years boil to the surface. He’s enchanted by the woman he never thought he’d attain, and she’s delighted to learn about Goose’s softer side—as well as his deep knowledge and love of Old Garnet which astounds her.

Yet within that knowledge is buried a hidden, deep vein of resentment in Goose that stretches back nearly a hundred years, far back into the history of the brand and family. This lingering bitterness threatens not only Harriet and Goose’s new love, but Old Garnet itself.

Read on for my thoughts on Cedar and Cinnamon.  No true spoilers, promise.

For this addition to the Bourbon Springs series, Cedar and Cinnamon – the Cover Description pretty much tells you what to expect in this story.  So I’m just going to tell you my emotional reaction to this story and let you combine the two in your mind.

Goose has been a pain in the butt troublemaker for years.  And for the most part he has earned and enjoyed his reputation as the town bad boy.  Yet what most folks see on the surface is all the further they’re ever going to go.  Down deep Goose is a man who made mistakes and is trying to find his place within the distillery – and because of an old feud and some bitterness passed down through the generations, sometimes doing the right thing for himself and the company isn’t easy.

Harriet likes order and Goose is the last person she wants to be working closely with.  They have a history – and maybe those feelings aren’t as solidly in the past as she would like to believe.  With a closer relationship she begins to see parts of Goose that she never realized were there and she definitely likes what she’s discovering.

Not everything is going to go smoothly – not the project, the business nor the budding relationship.  Mistakes will be made.  And atonements will have to be offered as well.  Can two people who obviously belong together get past what’s in their way and find true happiness together at last?  Hmmm.. to know that you’ll have to read Cedar and Cinnamon for yourself.

I enjoyed this addition to the series very much.  Everytime I think I can safely state that such and such is my favorite of the series – the next one comes along and takes its place, so no more declarations for me.  🙂  I loved the story, the characters and I’m definitely looking forward to what comes at us next.

*I received an e-ARC of Cedar and Cinnamon from the publisher and NetGalley in exchange for an honest review. That does not change what I think of this novel.*