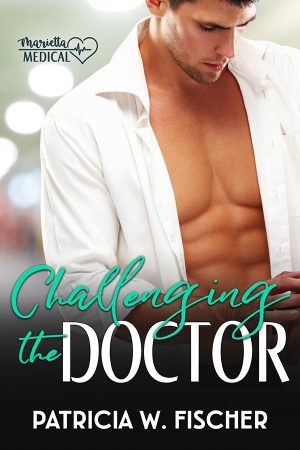 After a near-career ending event, ER doctor Edmund Davidson relocates to Marietta, Montana, hoping it’s the fresh start he needs. Edmund settles in quickly to life in a small town and thrives in his role as the new ER doc. He especially enjoys sparing with the gorgeous, smart, and headstrong nurse practitioner. Jade intrigues him like no women he’s ever met, but he can’t help feel that she’s burdened by a dark secret.

Jade Phillips wants to reboot her life after losing out on a promotion to head the ER to a newcomer, Edmund’s sister, Lucy. As Jade attempts to focus on selling her father’s place and close a painful chapter of her life, she discovers evidence of a dark secret. Jade finds herself in trapped between family loyalty and personal devastation. She knows her attraction to Edmund and her secrets could put them both in jeopardy, but when Edmund saves her brother’s life, she realizes she has to trust someone.

Edmund soon realizes he’s emotionally in too deep with Jade. He wants to protect her, but he’s professionally on thin ice already. If he doesn’t reveal her secret, their separate pasts can destroy both of their careers. But can he betray the woman he loves to protect himself? Or will he risk it all, even his heart?

Challenging the Doctor brings an interesting mix to the Marietta Medical series.  I had mentioned in my review of Resisting the Doctor that Jade struck me as rude, bad attitude, snarky… yet I felt she was holding on to some deep pain.  Ah, yeah, you could say that.  Jade is a complex character on many levels.  I didn’t always like her, but I understood why she did the things she did and the things she said.  If we follow the “Narnia-like” theme of this series so far, then Jade fits perfectly in her role (although Jade makes out far better in the end than her counterpart)  By the ending of this story I could respect the woman Jade became, or allowed us to see even if she wasn’t my top heroine of all time, she was realistic for what she’s gone through.

I simply fell in love with Edmund.  He has his own personal and professional issues to deal with, yet his reactions to Jade are believable and endearing.  He’s not afraid to dig beneath the surface, and also, to deal straightforwardly with what is uncovered.  There are many parts of this story that are not easy, are rather painful or will simply make you angry.  This is a roller coaster ride, where the ending isn’t always clearly in sight.

If you are a fan of Marietta, Montana and have read many of the series based there you are aware of a tragic thread that has been woven through several stories and series.  Challenging the Doctor is a story that will have information about that event that you will want to read.  Not going beyond that.

In all, I enjoyed this romance, even when a character made me annoyed with her as often as I cheered her on.  That happens sometimes, and really makes for an interesting reading experience.