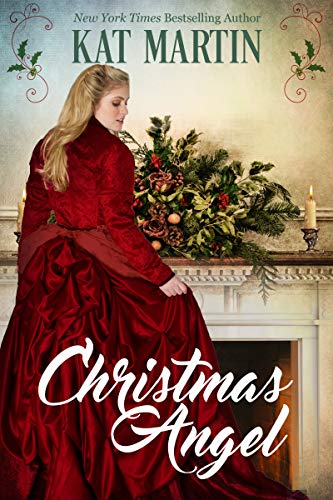 Dear Readers,
This story was inspired by a trip to Savannah. I visited one of the area’s Civil War forts and became fascinated by the discovery that General Sherman and his men had arrived in a conquered Savannah on Christmas Eve. What sort of Christmas could they have had? From there, my imagination
took over . . . I hope you enjoy reading Josh and Angel’s story as much I enjoyed writing it.  Kat Martin

Despite having been on opposite sides of the war, Yankee doctor Josh Coltrane is unprepared for the continued bitterness of his long-lost love, Angel Summers. Can these two former sweethearts learn to forgive and forget the past?

Christmas Angel is a poignant look at the devastation that war, hatred and bitterness leaves behind, even once the fighting is done.  Angel experienced such loss during the Civil War… her love, her parents, her home in many ways and the life she once thought she would live with Josh at her side.  Now Angel is faced with her hometown being taken over by the Yankee forces, and Josh walking back into her life no longer the young boy he once was but a man, a doctor, and a former love still very much a part of her heart no matter the anger she feels toward him now.

Josh had compelling reasons in his decision to fight for the North during the War.  That choice cost him so much, but the worst blow was losing his love, his future with Angel.  Now back in his hometown he’s experiencing the horror that those he loved and left faced during those four long years.  He can never expect Angel to forgive him yet when she needs his help, granted only in absolute desperation, perhaps there is a way that two people who once loved so deeply can put the past behind them.  Yet betrayal has deep roots.  Josh cannot stay, and Angel will not leave… where does that leave then now.

The Civil War, The War Between the States – no matter how you categorize it, this division of a country still has deep roots to this day.  Christmas Angel is a short but powerful look at the effect the division of a country had on two people very much in love and wanting a future together.  It was very easy to see both Josh and Angel’s side of events and watching them find their way back to each other was both heartbreaking and heartwarming.  If you are a Kat Martin fan, as I am, then you’ll enjoy this short Christmas tale.  There is an underlying sadness though because even when love wins the pain caused by hate has already taken its toll.