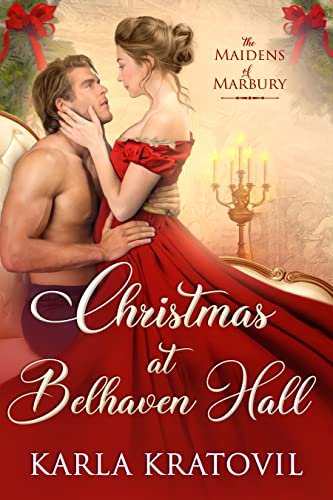 She wants nothing to do with him or the holiday frivolities…

Lady Olivia Rivenhall has always lived at Belhaven Hall. A year has passed since her husband’s unexpected death, and she’s been living in limbo wondering when she will have to vacate her home and finally decide what to do with the rest of her life. Just as she is beginning to believe that the new earl will never come to take possession of the manor, Maxwell Drake walks back into her life.

After almost dying in a gutter in Venice, Maxwell Drake vows to turn his life around. Learning that he’s inherited his estranged cousin’s title is exactly the fresh start he needs. Max is looking forward to enjoying Christmas in the English countryside at the estate he’s missed, but he’s dreading facing his cousin’s widow, the only woman he’s ever loved.

The attraction is stronger than ever, but so are the wounds. As Christmas magic steals through the ancient halls and secrets beckon to be shared, can these two lonely hearts find a second chance at love?

I am easily pulled into a second-chance romance, I want that happy ending for the couple that they were denied – for whatever reason.  Christmas at Belhaven Hall is the third story in The Maidens of Marbury series… and it definitely exceeded my every expectation for a second chance at love for this couple.  Complications, misunderstandings, and even themselves will get in the way of Olivia and Max to a certain extent, but they’re both stubborn and it’s that stubbornness that helps their romance along to a happy ending.

There was a time when Max and Olivia might have had a future together, they were in love yet circumstances interfered.  When Max left Olivia was certain that he would send for her… but instead, she ended up in a marriage of convenience with his cousin, Henry, in order to save her from a horrid match made by her father.  Time has passed, Henry was killed in an accident and Max has not returned to claim his inheritance, Olivia’s home, yet.

Christmas at Belhaven Hall captured my imagination and my heart so easily.  There are secrets being kept that have to come out into the open, and a few unexpected twists to their story, but overall theirs is a love story that would not be left in the past.  I enjoyed their banter as they reconnected, the hesitation of trusting once again, and the deep love that never truly died for either of them.  It would be so easy to tell you the entire story, but instead, I’d encourage you to pick up this story (or the entire series) for a lovely romance, a likable couple, and a well-written romance that will engage all of the emotions and leave you with a satisfied feeling by the ending.  I had fun here, and would definitely recommend Christmas at Belhaven Hall for anyone who loves a solid Historical Romance.

*I received an e-ARC of this novel from Tule Publishing. The opinions expressed in this review are my own – good, bad, or indifferent.*

« Saving a Scoundrel by Karla Kratovil
Year One by Nora Roberts »