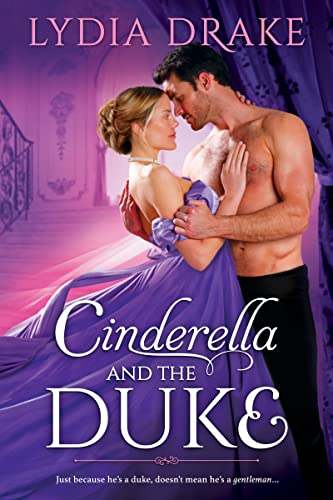 The Weatherford Ball is the last chance Julia Beaumont has to escape the clutches of her horrid stepmother. Any potential husband will do—rich, poor, even a reasonably well-groomed walrus. But all of Julia’s matrimonial chances are completely obliterated…thanks to the actions of an infuriating and utterly rakish duke.

Gregory Carter, Duke of Ashworth, would never risk his cherished bachelorhood by flirting with marriage-starved debutantes. But one look at the luscious and refreshingly clever Julia, and he simply can’t resist a stolen kiss—scandal be damned. Then just as things start getting deliciously interesting, the lady flees…leaving only a slipper behind.

And it must have been one dandy of a kiss. Because now Julia has proposed to him. After all, the lady needs a husband, and this roguish duke will certainly do. It’s simply a matter of making him the perfect scandalous offer…

Cinderella and the Duke is a sassy, sexy, delightful standalone Historical Romance that just happens to be Ms. Drake’s debut novel – something I would not have suspected just by reading Julia’s and Gregory’s romance.

Julia is very much living a Cinderella life as the unappreciated, overworked, and mostly ignored stepdaughter since her father’s death.  Yet she has one chance to take control of her life on her own terms when she gets to attend one ball – and encounters one handsome rake of a Duke who will change everything.

Gregory has no intention to tie himself to one female, he’s enjoying his bachelor ways far too much for that to happen – yet, one woman has him enchanted and the hunt is on for one elusive female who will make him an offer that he’d be a fool to turn down.  While he’s not wanting to fall in love and be tied down, he is tired of the constant attention from several wives in the ton who definitely would do anything for his attention – and the reputation, as well as the fights with husbands of those wives, is becoming quite old and annoying. Yet the marriage of convenience that Julia offers could change both of their lives… as long as hearts don’t get involved as well.

Cinderella and the Duke was such fun.  It’s sexy, and emotional, and drew me into this couple’s world quite easily.  While neither is perfect, they are eventually quite perfect for each other.  I enjoyed their banter and their sass – and who doesn’t love a hot sexual encounter (or several) between a couple obviously fighting their emotions for each other?  There are villains to loathe, love to be discovered, and a far different future in store for Julia and Gregory than they’d ever imagined.  I look forward to this author’s next title.

Available for the Kindle as this title is currently in KU