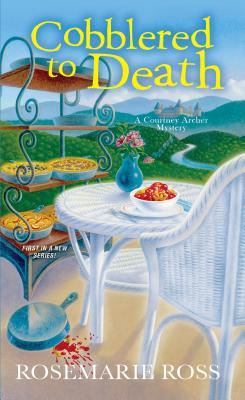 Courtney Archer is known for hosting the show Cooking with the Farmer’s Daughter . . . despite the fact that she’s actually a pediatrician’s daughter. Now she’s signed on for a role on The American Baking Battle. On this reality show, she can start developing a more authentic image for herself—and as a bonus, the usual backstabbing and manufactured drama isn’t part of the Baking Battle script. But genuine drama is heating up behind the scenes . . .

During a film shoot in the scenic Pocono Mountains, Courtney has to juggle career commitments like pots on a six-burner stove. Adding to the stress is Mick, a contestant who finds out about her fake farm-girl story. Determined to succeed at her new gig, she whips up a cherry cobbler in a cast-iron fry pan one evening and leaves it out to cool. But the next morning, it’s Mick’s body that’s cooling—right next to Courtney’s pan, now classified as a murder weapon.

Titles in the Courtney Archer Mystery series include – Cobblered to Death –

I had such a good time with COBBLERED TO DEATH, the opening story in the Courtney Archer Mystery series.  I love Cozy Mysteries of any type but this is the first food/culinary one that I believe I’ve read, so that was an enjoyable first for me — and starting a new series is always a treat.

In spite of her success, Courtney is holding on tight to a secret that she doesn’t want to keep but if it gets out will be the ending of her current career – or at least that’s what she’s been told.  You see, this “farmer’s daughter” has never set foot in a barn let alone grown up on a farm.  She’s usually careful about mentioning that little detail but one slip can make a world of difference.  Set to co-host a baking/cooking reality show, Courtney and a few other contestants have had troubles with one man — and when that man ends up dead by the cast iron fry pan Courtney’d baked a cobbler in the night before, well, to the police the answer is obvious – even if untrue.  Now she has to clear her own name, keep that pesky secret, and find the real killer before anything else happens.  Piece of cake, right?  Maybe not so easy after all.

There are fascinating characters, some chuckles, definitely red herrings, and enough twists to make a few pretzels in COBBLERED TO DEATH.  I’m not a reader who has to figure out whodunit, I’m more along for the ride through the clues and the adventure.  And I enjoyed myself, kind of guessed who the bad guy is but wasn’t totally sure until the reveal.  Different readers enjoy different aspects of Cozy Mysteries, and I was very satisfied with Courtney’s first adventure, enough so that I’ll be keeping an eye out for the next one which I certainly hope comes along soon.  If you love a good Cozy Mystery that will capture your attention right to the ending – then you’ll want to check out COBBLERED TO DEATH real soon.