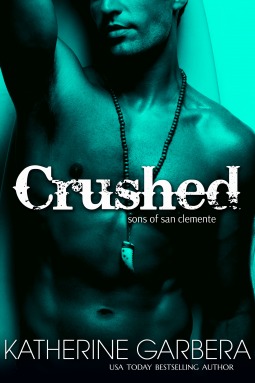 Before I get to my review of Crushed by Katherine Garbera – I just wanted to say that I am constantly amazed by the wide variety of novels that Tule Publishing offers to its readers.  From exotic locations of the rich and famous, to down home country living or simply ripped from tomorrow’s headlines we are never ever left with just one type of romance from Tule.  *tip of the reader’s hat* and a Thanks to Tule Publishing.

San Clemente, California is far from simply a beautiful oceanfront location with waves that surfers dream of hitting the shore daily.  There is wealth and poverty – and all of those spaces in between the extremes of this city.  It’s a place where edges can so easily blur, and what is right isn’t always a clear glass to look through.  Life happens.  Choices are made.  And  people live or die by those choices… just like almost any other city in the world.

Mia and Con’s story is one of those blurred edges.  Both have a history from way back in their childhood.  Neither is a product of their environment but they have been influenced by it.  Con found his way out when Preach came along and took him under his wing at a very young age.  His time in the military has honed his abilities like a slick machine.  But the man within still has unspeakable rage within him.  He and his brothers of the heart all have one defrocked priest and the love of his life to thank for the home they know.  Any of them would do anything for family.

Mia is paying for the mistakes she’s made.  Paying in such a heart wrenching way.  When her father took off for Mexico and her mother for Miami, her pampered life changed and it was time to face reality.  For Mia facing it came with the strength from a Tequila bottle – false strength rarely takes you in a good direction.  She made mistakes.  Big ones.  And a chance run in with Con on the beach, where he sees her wounds and bruises from a recent beating will propel her deeper into Con’s family and life forever.

Crushed is an intense, almost raw story of choices, circumstances and overcoming them all.  All of the characters have an edge, well earned from life.  Con doesn’t hold anything back from Mia, except perhaps words but his actions speak real loud.  Mia sees herself as damaged and tries to spar the man she’s come to love from the trouble that is following her – but true love doesn’t walk away when the one you love is in trouble.

I enjoyed Crushed very much and I’m looking forward to the rest of this series.  I would recommend this story for anyone who enjoys a story on the edgier side, a strong couple and amazing secondary characters who will be sure to have their own story told soon.

*I received an e-ARC of Crushed from the publisher and NetGalley in exchange for an honest review. That does not change what I think of this novel.*

« Some Girls Do by Amy Andrews
Blood Dark by Lindsay J. Pryor »