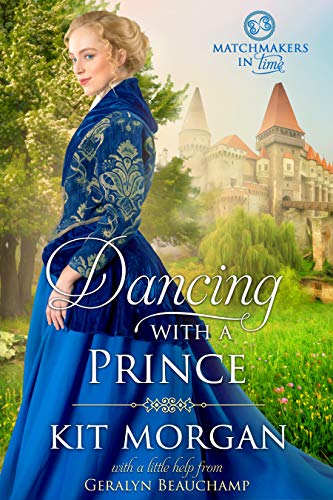 I had such a good time with ‘Dancing with a Prince‘, and if you’ve enjoyed any of Geralyn Beauchamp’s ‘Time Master‘ series, or Kit Morgan’s ‘Prairie Brides‘ and the subsequent spin-off series then you are in for a delightful treat in this one.  We are invited along on another of Dallan’s and Shona’s assignments of protecting the linage of future Time Masters by ensuring that the right people meet, fall in love, and marry with eventual children – all the while being in danger from some nasty villains who want nothing more than to wipe out of existence any trace of the Time Masters.  Just another day in paradise, right?

Do you remember Andel and Maddie (Madeleina) from ‘Her Prairie Viking‘ in the ‘Prairie Brides‘ series set in Clear Creek?  Well, if you do then we’re going to meet their oldest son, Prince Asger – if not, then it is a connecting series that you’d probably enjoy.  Asger is about to meet his destiny or his future wife… and I do mean future in more than one way, in ‘Dancing with a Prince‘.

Mitzi wants nothing more than to be a cop, like her dad.  Her passion is to protect and even at her small stature, well, she’s quite capable of taking the bad guys down.  But her father is against it, and if she’s not careful her new position as a security guard at a small Las Vegas casino will be as far as she travels on that chosen career path for her dad would do anything within his power to stop her from following in his footsteps.  Soon Mitzi will have the chance to protect someone very dear to her heart – but do so will require the help of a Time Master and a small jump through time to find the love of her life.

I enjoyed myself in this world with ‘Dancing with a Prince‘.  Meeting up with old book friends whom I’d met in the early stories of a connection series is always a special treat for me.  What can I say?  I love long connection series when characters pop up when least expected.  Mitzi is understandably suspicious about how she found herself in the past, but even more so about the draw she feels toward Asger – as though she’d die without him at her side for life.  She’s not wrong.  This couple is meant to be, but first, they have to get past suspicions, an arranged marriage announcement, royal temper tantrums, Time Masters with their own agenda, and a spoiled princess who just want to find true love.  It all comes together quite nicely with an unexpected second romance in a love story that is utterly charming.  I had fun and I believe you would, too.  In the mood for some romantic time travel?  Then pick up ‘Dancing with a Prince‘ soon.

« Flame by Donna Grant
Falling For The Texan by Nicole Flockton »