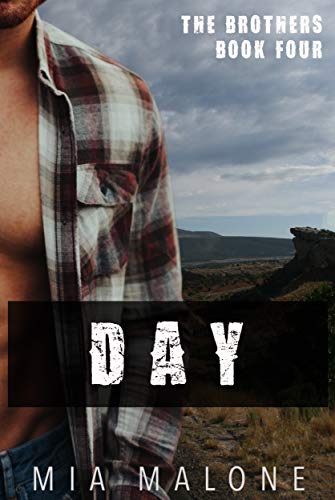 ‘Day‘ is the fourth title in ‘The Brothers‘ series and will take us on quite a roller coaster ride from sexy flirty moments to the deepest, somber sorrow imaginable.  To say that Day and Bebe’s story is emotional and intense is an understatement.  In a story that slowly builds tensions, understanding of past events, and facing an unexpected future, this couple and their friends will face so much with laughter, tears, anger, and sexy moments.  The book you’ll finish isn’t the one you believed you were starting – and that was a rare treat for me.  There is depth in Day’s story that will perhaps surprise some readers.  It is well worth your time to get to know Day and Bebe better.

To be frank, Day wasn’t my favorite character when his story began.  Day is a runner, when he cannot stand to be in his hometown another second he runs to the next location, and the next until he returns back where he started… home.  It took a while for me to begin to like this man.  Oh, sure, he’s sexy as sin and knows his way around a woman – but to know and begin to see the man beneath the mask that he wears so well, that took a bit of time.  In the end, I fell a bit in love with this man.  He’s been through a life that would have wrecked a lesser person, a person without the inner strength that Day has.  What he’s discovering is that life is better with Bebe in it.  This thing, this fling they have going is turning into so much more – and finally, he’s reaching a point where he’s growing up (even though he’s in his 50’s), staying in place, and loving one woman is a possibility for him.

Bebe went through a transformation a decade ago.  Divorced, done with her job, she went out and got rip-roaring drunk – and might have had a spur of the moment sex with the handsome stranger she met in the hotel bar.  She also might have had a heart attack seconds after that man left the room, eager to make his escape and not look back either.  Now, her life is far different.  As a well-known writer of erotica, Bebe will encounter Day once again… only this time tempers are going to flare, flirting will be involved, and clothes may fly at a moment’s notice.  Neither expected the emotions to grow beyond lust.  But each will be there for the rough times ahead for the other.  And they will find a love worth fighting for, and a future full of possibilities.

There has been an ongoing mystery in the background of this series which we will finally get answers to.  The emotions that this story brought out in me were unexpected.  I simply loved how Day’s group of friends, his ‘other’ family simply surrounded him when he needed them the most – even if he didn’t think he did.  ‘Day‘ is one of those stories that sticks with you long after the final page is turned.  I enjoyed myself, even when I wasn’t sure if I would – Bebe and Day are a perfect match, and watching their fall into forever was a damned exciting journey.