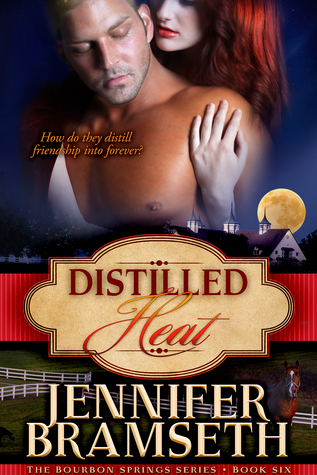 Pepper Montrose has only known bad luck for most of her life. But when incredible good luck finally strikes, her life is irrevocably changed by unexpected good fortune—as well as an unexpected encounter with Jon Buckler, her lifelong best friend.

Yet after finding each other, Pepper discovers something that opens old wounds and strikes at the heart of her fears about their new relationship. Jon doesn’t give up and is there for Pepper as she faces new challenges in her new life. His instincts emerge to protect her, but those same instincts end up threatening the future he desperately wants to claim with his best friend….the love of his life.

Read on for my thoughts on Distilled Heat.  No true spoilers, promise.

You know how the only luck some people seem to have is bad luck?  Well, that’s pretty much been Pepper’s life.  If it weren’t for bad luck she’d have none at all… to borrow a lyric.  Until that day when she took a chance, made a gamble and it paid off so much more than she’d ever dreamed of.

Now she could make those dreams that were hovering around the ends of her wishful thinking imaginings… reality.  A horse farm for retired Thoroughbreds, where they could live out their lives in comfort, love and the freedom to just be themselves no longer slave to jockey or race dates.

To set things in motion she needed a lawyer, a very good lawyer that she knew she could trust – her best friend forever, Jon.  Except instead of backing her, being happy for her good fortune and future dreams… Jon laughed at her.  He thought the whole thing was a fine joke she was playing on an old friend.  Wrong move, mister.  For a man who should have had some idea of Pepper’s past and her insecurities, and then you laugh when she’s asking for your help.  Yeah, very very wrong move.

Pepper found herself another lawyer – and it didn’t hurt one bit that her new legal representative was Jon’s rival attorney in Bourbon Springs.  How do you like that joke now Jon?

Of course, Jon has some serious groveling to do once he realized his mistake.  Pepper’s temper matches her name and her hair perfectly and she’s not about to let him off the hook easily.

They have a past but Jon is hoping that they also have a future, see he’s been in love with his best friend for a while now.  They may have lost touch for a bit, but now Jon knows what he wants and it’s a future with a very spicy lady.  Suddenly getting Pepper to understand, believe and accept that fact is vitally important.  Because along with good fortune, other things usually crawl out of the woods to try to take the good stuff for themselves.  Pepper is going to need Jon, but she is also going to have to get past more than that laugh – their romance is not going to move smoothly but if at the end Jon has Pepper for life it was worth the risks and the trouble.

I enjoyed Distilled Heat, very much.  Pepper was a character that I could relate to – having a temper of my own and having to eat crow often because of it, that kinda endeared both Pepper and Jon to me right off the bat.  Watching Pepper take on the journey of making her dreams a reality was enjoyable, even when the road was rocky.  Encountering old friends from the series and finding perhaps new ones as well is always a treat in a long ongoing series like Bourbon Springs.  Knowing that the series was expected to be 9 stories long – I’m hoping Ms Bramseth has something else in store for us once Bourbon Springs wraps up.  (hint, hint, *smile*)

If you adore a really good love story, with banter, mistakes, discovery of truth and a happy ending then Distilled Heat should be on your radar.  I would have no hesitation is recommending this story or this series to anyone who enjoys a good romance with a strong community feel to it.

*I received an e-ARC of Distilled Heat from the publisher and NetGalley in exchange for an honest review. That does not change what I think of this novel.*

« A Girl’s Guide to Moving On by Debbie Macomber
Angelborn by L. Penelope »