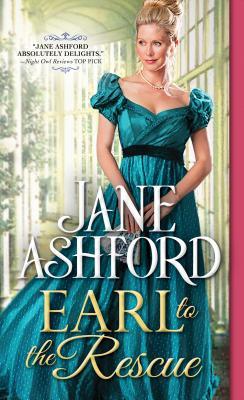 Normally I would be giving a  much different review of a Jane Ashford title… Current Title.  I have followed Jane Ashford’s works for many years now, I particularly enjoy her more recent Regency Romance titles.  I was disappointed and even annoyed to realize that Earl to the Rescue is a re-issue, re-titled, new covered version of Gwendeline (paperback and hardback versions) published in 1980.  While technically there is not one thing wrong with republishing a title, I personally dislike not knowing that is what I’m getting beforehand.  I did not enjoy Gwendeline very much back then, so if I’d known the facts I would not have requested this title.

If you are a die-hard Jane Ashford fan and want to be able to read her entire collection – without paying the amazingly high prices asked for earlier works – then this would be perfect for you.  For me, Earl to the Rescue has so much going on in it that you do need to search out the core story.  The core story is good, it just happens to be buried under kidnappings, lies, misdirection, possible scandals and untimely deaths.  Many readers will enjoy this story, for me it was a ‘good book’… that I had read years ago.

« My Forever Home by Debbie Burns
The Good, the Bad, and the Duke by Janna MacGregor »