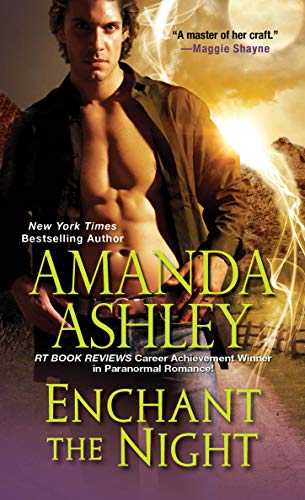 ‘Enchant the Night‘ brings us the story of a Hungarian vampire, born never made and who could mate/have children with human women.  Although Quill has lived a very long time he hasn’t found what some would consider a soulmate – until he encounters a woman who keeps the memory of his feeding on her blood despite his best efforts to wipe that fact from her mind.  Callie is unique in that she has her own magic, yet dormant, and comes from a line of witches that she had thought was just a silly family rumor.  No, Callie is a witch and she’s about to get an education in not only her own history and abilities but that of vampires and vampire hunters as well.

Most of what you’d want to know can be found in the Cover Description.  I am torn on ‘Enchant the Night‘ for there were parts that I greatly enjoyed, and others that felt bland or even uncomfortable, and not what I usually find in this author’s work.  In order to explain why I feel this way I’d have to give away spoilers – and that I do not willingly do.  This is going to be a review where I’ll tell you frankly that you need to make up your own mind about this book.  I’m giving it a 3.5-star rating on my blog and will round that up to 4-stars on the places I leave reviews.  It’s a good book simply one where I couldn’t connect with the characters and there were factors in the hero’s past that I couldn’t feel comfortable with given that Callie is supposed to be his soulmate.  Again, this is my opinion, you should make up your own mind.