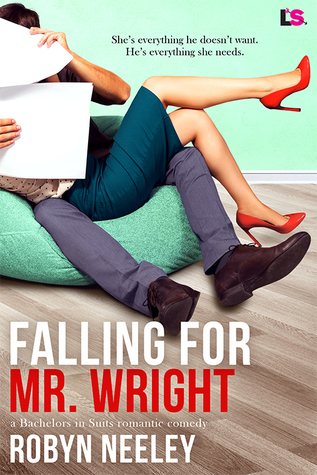 After being dumped two weeks before his wedding, civil engineer Ryan Wright’s not interested in love. Been there, done that, had the wedding deposits to prove it. Still, he can’t help lusting after the fiery redheaded executive assistant who’s stirring up feelings that aren’t exactly appropriate for the office.

Sarah Leonard is determined to make the CEO fall in love with her. To execute her plan, she’s going to need a little help in the form of her lunch buddy, the 6’2” office hottie who just so happens to be their boss’s best friend. Who better to tell Sarah everything she needs to know to win the other man’s heart?

Ryan agrees to help Sarah put her plan in motion, but he has no intention of helping her win anything. In fact, it’s time to show his office crush that he’s the guy she should be falling for…

Titles in the Bachelors In Suits series include:  Falling For Mr Wright –

I had such fun with Falling for Mr. Wright.  Sarah is so single minded in her quest to make her boss fall in love with her by Christmas that she practically missed the perfect for her Ryan Wright, her office buddy.  Sure, it’s true that Ryan isn’t into relationships since being dumped shortly before his wedding day – but better dumped before than after, right?  Just because he’s got a major problem with a little four letter word called love doesn’t mean that the right woman couldn’t change his mind… but Sarah’s more interested in getting the details on Ryan’s best friend Logan.  After all, who better to know exactly what a man wants in a woman than his best friend?  It might have worked out a lot sooner if Sarah had actually looked closely enough to realize that her “friend” was actually crushing on her, and in spite of being a bit afraid of falling in love Ryan was the much better match for her.  Guess it’s up to Ryan to show his lady that she’s been looking at the wrong man all along.

Sometimes I get lucky enough to find a story that has me smiling pretty much through the whole darned thing – and this time that was Falling For Mr. Wright.  It’s a lighthearted, friends to lovers romance that simply gives out those feel good sensations.  If I shook my head at either Sarah’s or Ryan’s antics and decisions, well it was a kind head shake not the frustrated type.  I really liked them and enjoyed their story – now I wonder who is going to eventually end up as Logan’s lady.  Guess I’ll have to wait for the next story in the series for any hints.

Looking for a fun romance this Christmas season, then I’d recommend Falling For Mr. Wright.  Full of banter, interesting secondary characters and a really good story, it’s sure to fill up your happy meter this season.