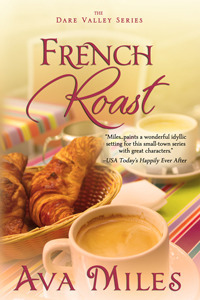 Small-town biz wiz Jill Hale has been in love with her childhood best friend Brian McConnell for as long as she can remember. A falling out led to years of estrangement, but when Brian returns to Dare Valley after trying to make it big as a chef in New York City, Jill’s determined to make amends. She’s convinced that starting a restaurant together will be the perfect win-win situation, allowing her and Brian to work together and play together.

After a series of missteps sliced and diced Brian’s career in the Big Apple, he came home to regroup and find himself. He’s convinced that reestablishing his connection with Jill, the girl who got away, will put his life back on track. And when she approaches him with her plan for going into business together, he’s certain it’s the one way he can have it all-his dream job and his dream girl. Jill and Brian are falling for each other all over again when Brian’s ex sashays into town, intent on sabotaging their reunion. Add in a mysterious investor who’s determined to get Jill on board with his project, and the bond between the couple is tested to the limit. Will their second chance at love implode, or will they find their own recipe for a happy ending.

Read on for my thoughts on French Roast.  No true spoilers, promise.

Jill and Brian’s relationship was once solid.  Their friendship began in childhood and continued through their high school days.  If Jill was honest with herself she’d say that she had loved Brian most of her life.  She believed that they would continue to be together by attending the same college.  When she learned Brian’s plan it was like a knife cutting through their friendship.  Brian was heading to New York to study, his plan of being a top chef at an exclusive restaurant meant getting as far away from Dare as he could.  Leaving behind the insults, the name calling, the pain of having no one believe in his dream but Jill.  It would also mean leaving Jill behind.  He didn’t believe in commitment.  Seeing his parent’s divorce and having his mother leave him with a father who just couldn’t care about his son’s drive or ambition to be a chef but instead bullied and belittled him.  If that was love, he wanted no part of it.  He didn’t realize that his leaving would end their friendship.  But he left anyway.

Jill has moved on, established her own successful coffee shop.  If not the life she had dreamed of, at least it was a good life.  Then Brian returned to Dare.  Her best friend Jemma died.  Life was not good, but she pushed through it.  Brian would try to regain Jill’s friendship.  And eventually she would give him a second chance.  But she still didn’t know the truth of why he had left New York City. – and once again Brian’s half truths, almost lies and omissions would drive another wedge between them, this time perhaps for good.

They loved each other – but was love enough without trust?

I enjoyed Nora Roberts Land, the first story in this series very much.  Some time has passed and I recently got to read the second novel, French Roast.  I am very torn on this review. I liked French Roast very much, and I’m looking forward to slowly continuing the series.  It’s just… Jill and Brian.  These two angered and annoyed me so many times on so many levels.  Jill’s hair trigger temper, willing to toss everything on a suspicion.  Brian’s willingness to work with his ex-lover who he knew wanted to cause trouble between him and Jill.  I just… wanted to smack people upside the head.

And that’s the power of a good story.  Even if we don’t like what the characters are doing, even if we want to shake some sense into them… we keep reading because we want to know – do they ever get smart, will they see past the lies, how can a happy ending ever happen.

I definitely enjoyed the set up for the next story, Peggy and Mac.  And I’ll keep reading.  At times, novels are like real life – we don’t understand why, but we keep going with the flow.