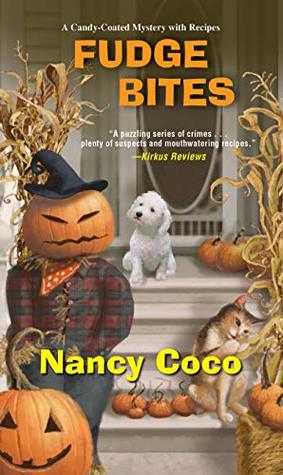 Halloween on Mackinac Island is a season of fun tricks, but finding a corpse is no treat for fudge shop owner Allie McMurphy . . .

NIGHT OF THE REALLY DEAD

It’s late October, the off-season for tourists, but locals are up and lurching for the annual zombie walk charity event. Though everyone’s living it up, trouble is just a few pawprints away.

Allie’s followed the bloody tracks of her calico cat, Carmella, to a body in the alley behind the Historic McMurphy Hotel and Fudge Shop. Unlike the island’s other walking dead, this one’s flatlined for good. It seems that someone is using the zombie fest as the perfect backdrop for murder.

Now amateur sleuth Allie and dreamboat officer Rex Manning must use every trick in their treat bag to unmask a killer in disguise.

Titles in the Candy-Coated Mysteries series include – All Fudged Up – To Fudge or Not To Fudge – Oh Say Can You Fudge – All I Want for Christmas is Fudge (3.5) – All You Need is Fudge – Oh, Fudge! – Deck the Halls with Fudge (5.5) – Forever Fudge – Fudge Bites –

FUDGE BITES  is the seventh story in the Candy-Coated Mysteries series – it’s the first story of the series that I’ve read and I didn’t have any difficulty in following the mystery.  Of course, there were character interactions that I didn’t know the background of, but that is easily dealt with by going back to the beginning at some point.  So, yes, it is a bit far into any series to just jump in, but I was able to and still enjoy the story enough to want to know what happened before, how these people came into the relationship they have with each other now.  That’s not easy to say about some series, yet even though I try to stick to a “from the beginning” reading routine I was perfectly fine with Allie and crew at this point in the series.

Most of what you’d need to know about FUDGE BITES is in the Cover Description, and because this is a Cozy Mystery I’m reluctant to say too much about the actual story – you really need to solve or try to solve this mystery on your own.  What I did find was an engaging story, likable characters (for the most part) and a mystery that kept me guessing until the reveal.  I had my suspects but a few twists and red herrings later I was still uncertain who to put the blame on.

Long-time readers of the Candy-Coated Mysteries series will undoubtedly completely enjoy this story.  I did and it got my curiosity stirred enough to want to go back – and when a story can make me be willing to put the time and money into going back to the start, well, that’s a world that I enjoyed and want more of.  I would recommend FUDGE BITES to any reader who enjoys a good Cozy Mystery, interesting characters and a solid mystery to solve.