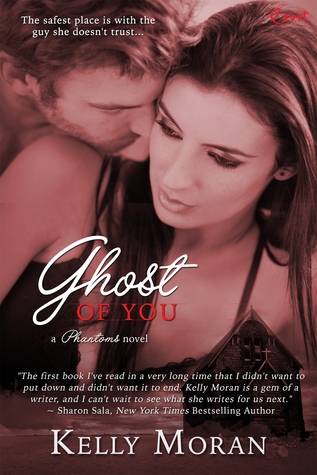 The safest place is with the guy she doesn’t trust…

It’s no secret amongst the Phantoms crew that lead investigator Sammy Hanesworth pretty much hates psychologist Cain McClutchen. The tension between them is taut with dislike…and unexpected attraction. Cain knows full well that something about him rubs Sammy the wrong way. But now they’re on a terrifying case-with orders from the network to get along or else.

Filled with past horrors, the Nebraskan site is more than creepy. And Sammy knows it all too well. It’s her hometown and near the place where her mother was killed. As the sinister presence makes itself known, Sammy finds herself turning to the last person she ever expected-Cain. Even as darkness surrounds them, tensions gives way to something bright and unexpectedly intimate. But nothing will prepare them for the evil they are about to face.

Read on for my thoughts on Ghost of You.  No true spoilers, promise.

It’s true that you can never go home again… or rather you never should go home again.  Some memories need to be left where they happened and then dismissed as old trash, for the most part.

The current case the Phantoms crew is working is far, far too personal for Sammy.  She grew up here, she experienced pain unimaginable here and her memories of this place overshadow the few good things that took place here in her home town.  Evil lingers and at times grows.  And there is little but evil at the old abandoned church, school house or cemetery.  Once evil takes up residence, it doesn’t leave willingly.

Ghost of You is mostly Sammy and Cain’s story – along with one helluva case to document for Phantoms.  If you’ve followed the series so far, then you are aware of the tension between Sammy and Cain.  Unfortunately the suits in the upper offices that run the show have gotten wind of the…shall we say tension between them.  And it needs to stop.  Either make nice in the sandbox or heat up the screen with intentional sexual tension for ratings or go home.  Simple, if you’re a suit giving orders – not so much so down in the trenches.

Cain is attracted to Sammy, although she’s given him no reason to think that the attraction is returned, at all.  Yet, there’s something in her eyes, something that makes Cain think that her attitude toward him is a shell she hides behind.  He intends to find out what’s behind that shell.  This case is going to be hard to begin with.  It’s centered in Sammy’s home town.  And there is more beneath the surface than she has told her crew so far.  When it’s possible that they are dealing with more than ghosts here, but leaning more toward the truly demonic, events get to the major trouble side of the scale real fast.

I completely enjoyed Ghost of You.  It is unbelievably tense and dangerous.  There is a mystery here that ties in several events that bring about an unspeakable evil in the end.  The target of this evil seems to be Sammy and while protecting her, Cain is also breaking down walls around each of their hearts.  You will be flipping pages fast in order to keep up with the action in this story.  We get to visit with the entire crew, but the main focus is Cain and Sammy.

I love paranormal in any form.  And yes, I watch shows like the fictional Phantoms all the time.  Cringing and scared spitless most often, but I cannot look away from the screen.  That is kind of like the feeling you’ll get when reading Ghost of You… you’ll want to look away, but you won’t dare.  I would highly recommend this third novel in the Phantoms series for anyone who loves those ‘bumps in the night’ scary moment of a truly good paranormal novel.

*I received an e-ARC of Ghost of You from the publisher and NetGalley in exchange for an honest review. That does not change what I think of this novel.*