Posted May 2, 2020 by Marsha in Paranormal Cozy Mystery, Series / 0 Comments 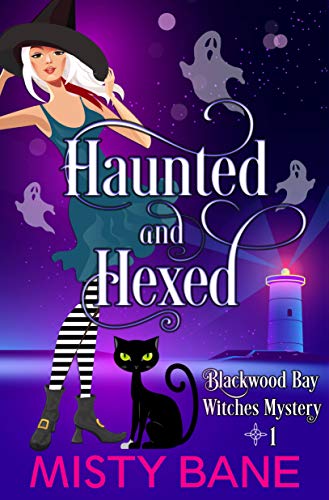 Welcome to Blackwood Bay, where magic and murder have come out to play…

Okay, if that had been on the sign when I drove into town, I probably would’ve thrown it in reverse and kept the pedal to the floor until I made it safely back to Las Vegas. Probably. Instead, I’d been lured in by the cute little beach town, a handful of instant friends, and a hunky local.

My name is Dru Rathmore Davis, and In my defense, my life had pretty much just fallen apart. So, after learning that I’d inherited a bookstore from a grandmother that I never even knew existed, I was desperate to make this my fresh start. I daydreamed of owning a quaint little bookstore and spending my weekends reading on the beach. Sounds great, right? And what could possibly go wrong?

Turns out, everything. The bodies start piling up along with my arrival in town, someone may have murdered Granny… and that’s only the beginning. As a former private investigator, I really can’t help but find myself drawn (or pushed) into doing a little investigating of my own. It also helps that the Police Sergeant is super hot… cliché, I know, but what’s a girl to do?

Things are much more complicated than they first appear though, and being new in town certainly has its disadvantages. No one is who they seem to be. Not even me.

The only ones I can trust are the dead. Well, and my cat. But none of them are talking. Or are they?

Connecting series: Blackwood Bay Witches Mystery Shorts — On a Witch and a Spell (Prequel) – One Spell of a Time –

Haunted and Hexed begins the Blackwood Bay Witches Mystery series with a fun, engaging story full of suspects, magic, spells, shapeshifters, and the unexpected – even in this small magical coastal town.

Life has turned upside down for Dru recently between discovering the man she planned to marry had been cheating with her best friend, and that she’d been left a bookstore by the grandmother she never knew,  Life or fate is throwing her a few curveballs.  She’s made the choice to travel with her cat and a few precious possessions to the coastal town of Blackwood Bay to plan her future and decide what to do about this bookstore thinking she might learn more about her grandmother while making those decisions in person.

Dru’s run into some serious bad luck on the trip, but just outside of town she does run into one hot cop who is determined, for some reason, to look after her.  Odd little town.  Anyway, Dru’s life is about to get even stranger as she learns she’s a powerful witch, can actually talk to ghosts… and discovers that the deaths of her grandmother and a young woman who worked in the store were far from natural causes.  And that’s only the start as events get stranger, people aren’t who they appear to be on the surface, and a murderer is still looking for their next victim – and that just might be Dru.

I was easily caught up in Haunted and Hexed and quickly felt right at home in this world.  While there are suspects galore I honed in on one in particular, but then I’m rarely reading a Cozy Mystery to figure out whodunit but for the suspense of getting the puzzle solved.  There are certainly twists and turns along the way, a few surprises, and a really good story to enjoy.  I will admit that there were a few times when Dru was just too slow on the uptake or catching clues right in front of her for me to really buy that she’d done much serious private investigating with her dad.  It didn’t affect my enjoyment of the story, simply stood out as odd.  In all, I had fun in this world and will definitely be following the rest of the series.

« Hexing with a Chance of Tornadoes by Mandy M. Roth
The Demigod Complex by Abigail Owen »