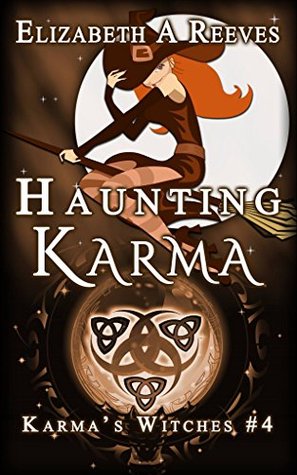 Once Amber discovers she has sisters, she at least isn’t all alone in the world.

Just when things should start to get easier…life gets more complicated than ever!

The Haunting Karma is getting a bit extreme.

Read on for my thoughts on Haunting Karma.  No true spoilers, promise.

Now that the three sisters have been reunited, it’s time for some learning and living.  For Amber the living part is going to be the most difficult.  While losing their birth mother and being placed into foster care wasn’t easy for Amethyst or Topaz, it was doubly horrible for Amber.  She had been placed with a loving foster family but shortly after had been kidnapped by a malicious woman who abused her.  So getting the living without constant fear was harder for Amber.  She had Geoff at her side and of course her sisters, but she was still floundering, feeling her way through this new life.

Amber’s special magical ability is being a medium.  Yes, she talks to dead people.  Unfortunately for Amber, thanks to modern day social media when she helps one ghost give a message to her husband – the internet explodes with knowledge of a ghost whisperer in Karma.  She has also been goaded by unseen hands to repeat a spell that will open doors to places that should have remained locked.

Haunting Karma was an enjoyable continuation of the three newly discovered witch sisters adjustment to a new kind of life.  This is a short novella with a powerful story captured in few words.  Amber, Amethyst and Topaz are beginning to form a relationship – but they are adults who lived separate lives, so that is going to take a bit of time.  But it’s happening, if slowly.

This is definitely a series of short stories that I could get hooked on, long term.  Unfortunately for readers, one of the authors of this series has announced her retirement from writing.  So unless another author steps in to tell that sister’s story any further, we may only have these six stories.  There are two more novellas to enjoy for now, and then time will tell.